If there was ever a New York Jets player who was “old school” it was Joe Klecko. He was as blue collar as they come and I saw every play of every game he was in and this I can tell you, he never took a play off. Fighting offensive lineman double and triple teamed as well as overcoming major injuries would get complaints from others but you never heard a complaint from Joe Klecko. He played hard no matter how much the odds and manpower were stacked up against him. As the argument rages on from Jets fans to get Joe Klecko into the NFL Hall of Fame, the time is getting closer for when Joe will be wearing the gold jacket. 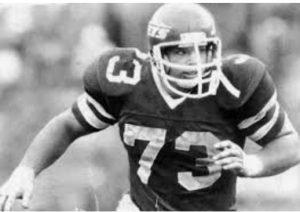 Joe Klecko was born in Chester Pennsylvania. He went on to play football for Temple, but also dipped his toe in semi-pro football before playing in college and, in fact, used the name Jim Jones to maintain his college eligibility. While at Temple he led the team in tackles his last three season’s 1974-76 and made the All-East team twice. In one particular game in 1973, against the Delaware Blue Hens, he led Temple to a 31-8 victory getting 15 tackles and 5 sacks. He was inducted into the Temple University Sports Hall of Fame in 1987.

In 1977 the New York Jets drafted Klecko in the 6th round, 144th overall. The Jets went 3-11 his rookie year, but after he got eight sacks that season, the Jets knew they had something with Joe Klecko. In fact, no one knew it at the time but this began the birth of the New York Sack Exchange. At first it was Klecko and Abdul Salaam. They were later joined by Mark Gastineau and Marty Lyons and in 1981 all four players combined for 66 sacks, including a league leading 20 1/2 by Klecko, who made All-Pro that season.

Despite a career fighting major injuries, it was Kelcko’s tenacity and flexibility that became his most valuable assets. Unfortunately in 1982 Kelcko ruptured his patella tendon in his right knee against the New England Patriots in the second game of the season. Coming back from this injury in 1983, the Jets moved Klecko from defensive end to defensive tackle and he made the Pro Bowl that year and repeated his Pro Bowl honors in 1984. In 1985 the Jets switched to a 3-4 defense and Klecko, yet again, changed positions and became nose tackle.

He was not deterred and poured everything he had into his new position and led the Jets in tackles with 96. He also had 5 forces fumbles, and 7 1/2 sacks to earn his second All-Pro selection.

In 1987, Klecko was recovering from another knee injury and played in only 7 games that season. He was let go by the Jets after that season and played one more year with the Indianapolis Colts in 1988.

My favorite memories of Joe Klecko was when he was the Jets nose tackle. His bull rush was second to none. And to get 7 1/2 sacks at nose tackle is really incredible. Keep in mind that Hall of Fame player Curley Culp (KC Chiefs, Houston Oilers) had 68 1/2 career sacks while Klecko had 78 career sacks. I am always comparing these two because I was a huge Curley Culp fan and, like Joe, Culp played more than one position in his career. Some think that playing three different positions may have hurt Kleckos career. Hall of Fame offensive guard Joe DeLamielleure said of Klecko:

"You can't think of his ten year period without him. I had to block Joe Greene and Merlin Olsen when I was playing and, believe me, Joe Klecko was equal to those two guys. If Joe Klecko had played one position for ten years, he'd have been considered one of the top two or three players at that position, whichever one it was.”

“ he was a great defensive lineman and he was one of the two best interior lineman I ever faced.”

The argument for Joe Klecko to make the NFL Hall of Fame is not really much of an argument when you look at the numbers. I mentioned Curley Culp earlier because he was similar playing more than one position. Another Hall of Fame player Dan Hampton, who was a wonderful player for the Chicago Bears, also played multiple positions on the defensive line. When you compare Hampton and Klecko, it is stunning how similar the number are. Here we go:

Dan Hampton was a great player but so was Joe Klecko. Klecko possessed the old style grit and determination we all like seeing in our players.  To really get an idea of the competitiveness of Joe Klecko, here is a quote from him from a New York Post article written by Steve Serby:

Give me 11 Joe Kleckos on offense and another 11 on defense and the Jets will never lose another game. In fact, I’ll take just one Joe Klecko. There has never been a NY Jets player like him! Present day Jets should watch film of him and learn. Joe Klecko never took a play off and the only thing that ever took him off the field was an injury. He deserves, and he will be in the NFL Pro Football Hall of Fame!