The New York Jets hiring of Robert Saleh has given the organization hope, with a new coach getting a chance to lead a team that has been out of the playoffs for ten straight years. For more than the past ten years management, ownership and coaches have dug a deep hole for this team. Many missteps were taken that defied comprehension. I’ve lived through Woody Johnson’s obsession with a West Side stadium in Manhattan, his trade for a once talented Brett Favre and even his trade for an untalented quarterback like Tim Tebow. The Favre move was more reasonable and led to an 8-3 start. The Tebow move left many Jet fans scratching their heads. To add salt to the wound, Mike Tannenbaum, as general manager, extended the contract of Mark Sanchez which removed much needed flexibility at the QB position. This might have been the worst move he ever made.

More generally, Jet drafts were memorable only for their history of failure. Keep in mind that when you miss completely on a #1 pick, this is a setback, but one from which you can recover.  However, if this continues a team cannot advance, and will likely go backwards. Draft busts like Vernon Gholston, Kyle Wilson, Quinton Coples, Dee Miliner, Darron Lee and Christian Hackenberg, (a 2nd rounder) were more the norm than the exception. Additionally,  general managers will do things to cover themselves when they realize their pick is bad. First off, they will keep the pick longer than they should, and retaining a sub par player presents a host of other problems. For example, some have said the Jets passed on Pat Mahomes because Mike Maccagnan still had high hopes for Christian Hackenberg. Also general managers will grasp at straws to overcome drafting deficiencies, overpaying free agents hoping to calm fans and the media with short term solutions. Trumaine Johnson was an overpaid bust. Success in the draft is a combination of research and luck. Good research results in good luck, and It seems like bad luck has been a religion when it comes to Jet’s draft picks.

The positive news for Jet fans is that the combination of GM Joe Douglas and head coach Robert Saleh looks like the Jets finally got it right. Saleh came across well in his introductory press conference and hopefully he can work well in tandem with Douglas. One thing that was spelled out was that Robert Saleh will report to Joe Douglas who will report to the Johnson brothers. This is how it should be. Douglas at 45 and Saleh at 42 were cut from the same mold.  Both worked their way up in the 24 hour grind of the NFL from the bottom. Joe Douglas started by handing out his resume at a Richmond college pro-day while he was in his football uniform. Robert Saleh came in the NFL from the finance world after his brother escaped the World Trade Center on 911 and that was an impetus for him to change his life and career. Both Douglas and Saleh eat, drink and sleep football. There will be a lot less fairy tale answers to listen to trying to convince fans why the quarterback doesn’t have the green light to ever audible to a sneak on a 3rd or 4th and short yardage. When someone makes an error, they will explain their decision and own up to it. We already saw a sampling with Douglas almost all but admitting it was a mistake not re-signing Robby Anderson. There will be no more Trumaine Johnson free agent signings or drafting players like Jace Amaro or Stephen Hill.

Things are lining up for the Jets to be successful. Once the Sam Darnold issue is resolved, things will happen with the exact direction more defined. We have heard repeatedly about the abundant draft capital the Jets have as well as the cap space available. Both the draft and the free agent signings used to build a successful franchise will be used in a disciplined fashion with Douglas knowing how to trade down and accumulate picks so the misses can be offset by the successes. The Jets may still have to overpay for free agents but hopefully they will overpay for the right ones like guard Joe Thuney or wide receiver Curtis Samuel.

By no means will Douglas and Saleh bat a thousand. Mistakes will be made by both and I will be the first to second guess them. But as we approach the start of the new NFL league year, I have not felt this confident since Bill Parcells. Since that 2010 season, things have gone pretty much the wrong way but they will improve. And if Jets fans don’t think it can happen fast, look at this:

The Jets can turn this around fairly quickly.  Fans should know by the 2022 season if they have moved past years of mediocre drafting, questionable free agent signings and bad trades.  When the new league year begins on March 17th at 4pm look for the Jets to start taking out the garbage. It cannot get here soon enough for me.  I'm optimistic, but for the first time my optimism seems reasonable and I hope that all Jets fans share my optimism! 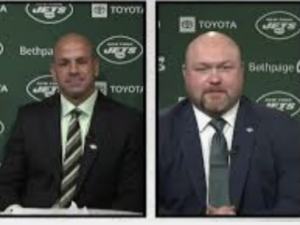