Over reaction is the emotion of the day! Zach Wilson’s day one practice took place after flying from the west coast on the red eye. Jets fans were focused on all the beat writers' Tweets trying to instantly find out how Zach looked. His first day was not good and the knee jerk reaction was incredible. The B word was even brought up and another message board put his name in the same sentence with Christian Hackenberg. In Zach’s day two, the first open practice for the fans at Florham Park, he looked completely different. Highlighted by an 80 yard TD pass to Elijah Moore, he made a variety of very good throws including some off balance and moving to avoid contact. Other names surfaced on the Internet comparing his quick release to Dan Marino’s.

We are all guilty with knee jerk reactions this time of year. Fans are looking through a microscope making quick evaluations wanting to avoid all the natural growing pains of a rookie, especially a rookie quarterback. I’m as guilty as every Jets fan. My co-hosts on our Podcast Ray Clifford and Ralph Sharaga, will tell you how I went berserk last year every time Mekhi Becton went into the tent during the game calling him a bum when in fact he may be our left tackle for the next ten years. Is Zach Wilson the real deal? It will take time to find out but in this “now” world wanting everything immediately Jets fans patience will run thin at times.

Comparisons to other first round drafted quarterbacks will be fast and furious. Especially Justin Fields and Mac Jones picked after Wilson. Jets fans have to keep in mind that almost never does a rookie quarterback light up the league. Let’s look at some stats of first year quarterbacks who have multiple Super Bowls wins.

The team record reflects the games started. You can see my point. Remember that Zach Wilson is a rookie, playing under a rookie head coach on a very young team. I guarantee there will be more than one time when he throws an interception with no receiver in sight and we Jets fans will yell out:

“What was he looking at?”

Second guessing and over reacting is what makes sports fun. Zach Wilson will be a success in the NFL but we can’t judge him just on the next  four months. Ask any NFL coach and they will tell you that the leap from year one to year two for quarterbacks is when you should see a marked difference and improvement. As a Jets fan since 1964 I’m as impatient as any Jets fans but this I know,  it will be more like 14 months rather than 4 before you can make a fair assessment of Zach Wilson.

Listening to the radio a few weeks ago, you would have thought it was a done deal that Nick Foles would end up a Jet. The thought was either he would get cut or the Jets would give the Bears a 7th round draft pick. Not so fast!  If the Jets are not in the market for a veteran QB, then okay. But if the whispers are true and Mike White and James Morgan are not NFL material, the Jets better move fast to do something.  The Colts’ Carson Wentz is out of the pre-season with a bad foot and QB Bret Hundley just signed a contract with them. The Patriots Jarrett Stidham underwent back surgery and is expected to miss three months so don’t look for Brian Hoyer to become available anytime soon. Three days ago it was announced the Jets were bringing in Josh Johnson and Sean Manion for a workout. Too late for Manion! The Seahawks just signed him.

And here’s a precursor for the upcoming season. Three Viking quarterbacks have tested positive for Covid. The bottom line is quarterbacks whether starters or back-ups aren’t plentiful. Some of the names still out there are Matt Barkley and Blake Bortles among others.

If I’m Joe Douglas, I move sooner rather than later. In this Covid society I say most teams will need four quarterbacks to keep, with at least one and maybe two who will be quarantined as a preventive measure.

Jets Kicking Game Is Not Good

A few months ago before the draft and free agency I wrote an article for Jets Rewind:  The Position No One Mentions. I will never pretend to be as smart as any general manager in the NFL. Joe Douglas has more knowledge in his pinky about personnel and talent than I’ll ever have. But I called this! As I wrote back then since Mike Maccagnan let Jason Meyers go, the Jets kicking game has been awful. The last few years names such as Sam Ficken, Brett Maher, Kaare Vedvik, Sergio Castillo, Chase McLaughlin and Chandler Catanzaro have kicked for the Jets or have come close. I might be missing a dozen or so names but who's counting? Each one of the above has not distinguished himself on the field. And while I am normally nervous about field goals, the last few years the extra point attempts had me watching with a hand over both my eyes at times.

The Jets cut Sam Ficken for umpteenth time and signed kicker Matt Ammendola. Hey Sam, here’s a hint. Don’t go too far or unpack your suitcase.You may be back quicker than you think.”

Last year’s punter Braden Mann was a good pick and was having a very good year until the last 5 or 6 games. But I predict he will be a solid punter for years. I thought Joe Douglas should have done the same thing with a kicker and picked Evan McPherson from Florida. The Bengals picked him in the 5th round. Ouch! What am I looking for? Adam Vinatieri kicked for the Patriots from 1996-2005. Without missing a beat, Stephen Gostkowski kicked for them from 2006-2019. Over two decades of solid kicking for the Patriots. And I mean field goals, extra points, kickoffs and a few onside kicks mixed in. If the Jets go through another torturous season from our kicker, then JD has got to step up and use a draft pick in 2022 for one. Early names to watch in the coming months: Andre Szmyt, Syracuse. Lucas Havrisik, Arizona. Parker White, South Carolina.

….If the NFL has slotted salaries for rookies, why not a standard uniform rookie contract either with or without “offsets” so they get rookies into camp on time…..The Becton-Lawson match-up has gotten a lot of early ink. This is great for both players and Becton will be a better player for it…..Bleacher Report ranks the Jets as the most improved team in the NFL. We’ll see!…..Denzel Mims working with the 3rd team is very bothersome. Something is up there that we don’t know about…..Newly signed kicker Matt Ammendola went 60-78 on field goals and 179-183 on extra points during his Oklahoma State career…..Jets made a mistake not bringing Joe Flacco back. This is a position Joe Douglas should have overpaid for …..A second franchise tag for Marcus Maye comes with a 20 percent raise — a $12.7 million salary.  Maye is seeking a long-term deal closer to the ones that Denver’s Justin Simmons and Chicago’s Eddie Jackson signed. Simmons has the highest average salary of any safety at $15.25 million…..I’m looking for big years from veterans CJ Mosley, Bryce Hall and Quinnen Williams. And from rookies, Elijah Moore, Michael Carter and Alijah Vera-Tucker…..Jets first pre-season game is in 13 days. Saturday August 14th against the Giants. Wow!…..Stay safe Jets fans….. 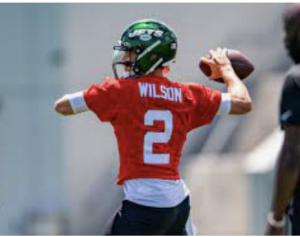