In 2004 the New York Jets thought they had free agent cornerback Antoine Winfield signed, sealed and delivered! Well almost. Winfield was regarded as one of the top free agent defensive backs available despite his small stature at 5’9”, 180 pounds. The Jets had wined and dined Winfield’s agent Richard Katz and as negotiations went deep into the night, the Jets thought they had their man. In fact as the Thursday night negotiations went on, the Jets were so sure they had him locked up, that they started to discuss a press conference for Friday to announce the signing. Rather than keep him at the negotiations the Jets told Winfield to go back to the hotel, get some sleep and be ready to sign the contract in the morning. This was a huge mistake as the Vikings snuck back into the picture. Winfield was a former first round pick of the Buffalo Bills from Ohio State. Needless to say typical luck of the New York Jets that Winfield ended up signing a six-year deal worth $33.8 million with the Minnesotas Vikings. At the time Herm Edwards was the Jets head coach and Terry Bradway was the General Manager. Winfield had said it was for personal reasons that he didn’t sign with the Jets. Some sources said it was his wife’s reluctance about living in the New York/New Jersey area. Whatever the reason the Jets were left standing alone at the alter. And of course Antoine Winfield ended up making the Pro-Bowl in 2008, 2009 and 2010.

Now jump ahead fifteen years to March 2019. Anthony Barr the gifted linebacker playing for the aforementioned Minnesota Vikings had agreed to sign a free agent contract with the Jets. The Jets supposedly had offered to pay Barr $15 million per year. The Vikings had drafted Barr from UCLA, with the 9th overall pick in 2014. He wanted to give the Vikings one last chance to up the ante with their offer. And they did! He agreed to a five-year contract with the Vikings worth $67.5 million with $33 million in guarantees. The average yearly salary of $13.5 million was less than the $15 million per year figure the Jets were offering. Again the Jets were left standing alone at the alter. The Jets General Manager was Mike Maccagnan and the coach was Adam Gase. At the time the 29-year old Barr was in the middle of a very good career making the Pro-Bowl four times.

And in between these two episodes was the Kirk Cousins chapter. Cousins agreed to a three-year $84 million guaranteed contract with those same Minnesota Vikings. At the time, this deal made him the highest-paid player in NFL history. Like rubbing all Jets fans, coaches and front office personnel noses in it, the Vikings web site showed footage of the free agent process Cousins went through. Stunningly, part of video showed Cousins being offered a $90 million dollar guaranteed contract from the Jets. He used the Jets offer to go back to his agent to get Minnesota to raise their offer to the agreed upon $84 million. Yes Jets fans, he took less money to stay with the Minnesota Vikings. Does anyone see a pattern here?

As New York Jets fans reflect upon these three episodes they should move on as the they have a new sheriff in town in one Joe Douglas. A lot has been written about JD and besides letting Robby Anderson go, mostly positive.

The Jets just signed free agent right tackle Morgan Moses to a one-year contract. The deal has a  $3.6 million base salary and Moses can get a maximum of $5.3 million with 80 percent or more of playing time incentives according to Ian Rapoport. A lot went into the Moses signing starting with Jamison Crowder agreeing to reduce his salary a couple of weeks ago and stay with the Jets. In other years this would have been unheard of and Morgan Moses would be using the Jets to up the ante from other teams. But those times are gone.

With Joe Douglas at General Manager and Robert Saleh as head coach there is definitely a different vibe around Florham Park. With the OTAs and mini-camp completed, the mood for New York Jets fans is trending up. Of course, we have read all the fodder about how well Zach Wilson performed and how the young rookie cornerbacks are playing like grizzled veterans, but remember this is only in shorts playing against themselves. JD knows how to play the draft and knows how to sign and deliver free agents. The two things we know about Douglas is that when he has a ballpark price in mind about the worth of a free agent, he doesn’t budge. And he is incredibly patient. Robert Saleh seems to have an uncanny ability to inspire his players like a Tony Robbins on the sidelines. The Jets have yet to have one regular season play but as a NY Jets fan since 1964 this I can tell you, this waiting period from now until training camp seems like decades away. Most Jets fan like me can’t wait for it to start. With the combination of the virus subsiding and the Jets new hierarchy, the 2021 season can’t begin soon enough!

With Joe Douglas and Robert Saleh we might be seeing a “reversal of fortune” with players and agents using other teams to up their free agent price only to have the Jets move in at the 11th hour to snatch away a Pro-Bowler. Believe it or not the New York Jets are seemingly becoming a destination for players to go to. Joe Douglas is showing his administrative ability to budget cap space while at the same time upping the talent pool. The biggest problem that JD has created this year is how are they going to handle an overload of talent at certain positions i.e. receivers, running backs and offensive linemen. A problem Jets fans like myself are welcoming. The New York Jets have not played one game in 2021 but the feeling of the fans is moving in a positive direction. The Morgan Moses signing doesn’t mean the Red Sea will part but the fact that he is now a New York Jet speaks volumes and I love it! 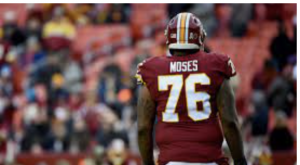 Coach Saleh Should Take A Lesson From Tuna!

Are you involved in youth baseball or any youth sports like Marty?

Go to his free blog with tips & videos. From t-ball to that Division I scholarship, go to: