Mark Gastineau’s speed off the ball, was beyond imaginable! You’d swear he was calling the snap count. There were a lot of times as a New York Jets player from 1979-1988, that Gastineau could not be blocked. I remember how he would line up on one side as a defensive end, and then as the opposing team broke the huddle, he switched to the other side and the offense had to audible. He was always known for his sacks but he did more than just flatten quarterbacks. He kept offensive coordinators up at night trying to figure out how to neutralize him.

Marcus Dell Gastineau was born on November 20 1956 in Ardmore Oklahoma. His family moved to Springerville Arizona after his parents bought a ranch. Springerville is a small town in the eastern part of the state not that far from the New Mexico border. While Mark was young, he broke his leg so badly that doctors said he would never walk again. He overcame the injury. He attended Round Valley High School and at the urging of his dad, he played football and showed promise. But he was not recruited from any major colleges.

He ended up going to three different colleges. First he entered Eastern Arizona Junior College. He did well earning All-American honors and transferred to Arizona State University where he played just one season at defensive end. He finally settled upon playing at East Central University in Ada Oklahoma. Even though he had 27 sacks in his college career, he was projected to be an 8th round draft pick. 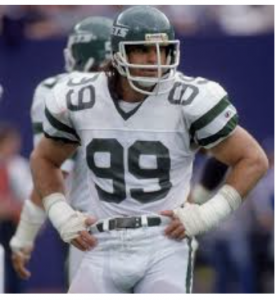 In 1979, the Jets coaching staff was coaching the North squad of the Senior Bowl team, just as Robert Saleh and company did in 2022. A defensive lineman, Mike Stensrud could not play because of an injury. The Jets Connie Carberg, the first female scout in the NFL went to work. Without today’s cell phones and internet, Connie had to hustle to get a player in time. She suggested the Jets squad get Gastineau, who was thrilled to be asked to play, to replace the injured player. Connie’s move helped change Jets history.

After the Jets coaching staff saw what Mark Gastineau had to offer, his stock quickly went up from the original projected 8th round. The Jets felt so highly of him, they chose him in the second round in a draft that also produced Marty Lyons and Johnny Lynn.

Gastineau quickly became the opposing quarterbacks worst nightmare. In his first year in the league, he only started one game and produced two sacks for the season. In his second year he started all sixteen games getting 11 1/2 sacks. It was his third year in the league 1981, that Mark Gastineau went to elite status getting 20 sacks and being selected to the Pro Bowl. 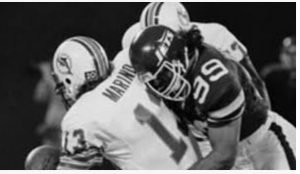 The following season is when it all came together for the Jets.  The season was shortened because of a strike. The teams played 9 games and the Jets made the playoffs. They beat the Cincinnati Bengals 44-17 that day despite being down 14-3 at one point. What I remember watching that game with long time friend and Jets Rewind co-host Ralph Sharaga, was the amount of times Gastineau hit Bengals quarterback Ken Anderson just as he released the football. Quarterback pressure stats were not kept at the time but Gastineau’s had to be record setting that day. Though he had only one sack, it was Gastineau that got into Ken Anderson’s head and the usual sure passer threw three interceptions.

The following week, the Jets continued their playoff run with a 17-14 victory over the Oakland Raiders. Gastineau sacked Jim Plunkett once that day helping to lead the defense holding the Raiders to one score in the second half. Unfortunately at the time, the stat for tackles was not kept.

In the AFC Championship game that followed, the Jets lost to the Dolphins in a controversy with the game being played on a wet field. The rumor was that Dolphins coach Don Shula kept the field uncovered when a rain storm came figuring, and figuring right that a wet field would offset the Jets team speed, including Gastineau and running back Freeman McNeil. Five interceptions by Jets quarterback Richard Todd also contributed to the loss. As with most Jets fans, this game sticks in my stomach not just because the Jets were better than the Dolphins, but because I am 100% convinced they were also better than the eventual Super Bowl winning team, the Washington Redskins.

Mark Gastineau continued his dominance as a pass rusher the following two years. He led the NFL both years in sacks with 19 in 1983 and his career best 22 in 1984.

A big part of Gastineau’s career was the players he teamed with on the defensive line.  Joe Klecko, Marty Lyons and Abdul Salaam teamed with him to form the New York Sack Exchange. A name given by Jets fan Dan O’Connor through a contest held by the Jets. The New York Sack Exchange was the most feared defensive front in the NFL for a few years. Just look at the 1981 season. Gastineau had his 20 sacks and Klecko had 20 1/2 sacks which is incredible!

Mark Gasitneau ended up playing 10 years in the NFL, all for the New York Jets. He had 107 1/2 career sacks. In 1984 he was voted the AFC defensive Player of the year. He was selected to the Pro Bowl four times and was named first team All-Pro three times. His record was eventually broken in 2001 by Michael Strahan, with an assist from future Jet Brett Favre. With the Packers up by nine with less than a minute left, rather than kneel down on 3rd down, the last chance for Strahan to get the 1 sack he needed, he inexplicably called a qb rollout to an unblocked Strahan's side of the line. Both Favre and Strahan continue to deny it to this day

Mark Gastineau was one of the players credited with becoming one of the original “sack” specialists in the NFL. The league started recording the sack stat in 1982 partly because of Gastineau and the Sack Exchange.

When you evaluate the complete talent of Mark Gastineau, it was his pass rushing skills that stood out. But beyond that, the fear he put into defensive coordinators and offensive lines is something that statistics don’t show. Today Mark Gastineau is going through some challenging physical issues. When he played, Jets fans yearned for the opposition to try and pass the ball just to see Gastineau and his quick moves. There was never a Jets pass rusher like him! The Jets and any NFL team can use a Mark Gastineau today!

Playing baseball & softball for a lifetime!