From Jon Gruden to Chris Ballard to Joe Douglas, every General Manager and organization is happy with their draft. One of the hardest things to do is is predicting if a great college player can transition to the NFL and be great. For every Peyton Manning there is always a Ryan Leaf but we’ve heard that story over and over again. The fun part of the draft for us fans is that when the guess work is right, we all feel like we had something to do with it.

“See I knew Brad Smith and Leon Washington were steals in the fourth round.”

I’ve heard that line forever. The Jets are getting lauded for their first four picks. According to some, their first  three picks had a grade of 90 or better which in NFL scout circles means a lot. I’m optimistic and even Jets Rewind’s Ralph Sharaga sent me a text feeling better about the Jets organization than he has in years. Let’s look into each draft pick and their odds of making the team which includes either the 53-man roster or the practice squad.

He is in! 100%. According to ESPN’s Rich Cimini, Zach Wilson faced only 4 defensive players that were drafted this year. So this shows the talent he faced was not strong. Doesn’t matter. I think the kid will flourish after a rough first year.

He is in! 100%. They will move him back to guard which is his natural position and he will play there for 10+ years barring injury.

He is in! 100%. Carter will get more touches than people think. I’m looking for him to get between 15-18 touches per game his rookie season.

He should be in! 80%. Athlon Sports gave him a 2nd or 3rd round grade. He was a bit of a one-year wonder but fits the Saleh DNA covering tight ends and is strong against the run.  Had a bad Pro day but could be a sleeper who may end up being a starter!

He should be in! 60%. Small framed but great speed and should make the 53-man roster. May mean the end of Jets Lamar Jackson.

Only 50/50 chance. Another player who showed promise for only one year. He has to love special teams. That is his ticket to stick.

He should be in 75%. He may be the most talented draft pick after the 4th round. He is coming off an ACL so look for him to start on the PUP list and maybe follow the same path as Bryce Hall not being activated till the second half of the season.

I only give him a 50% chance. He is a practice squad player who probably spends the season there unless injuries deplete the Jets special teams.

Last week he was only a 25% chance of sticking. But with the broken foot by Quinnen Williams (welcome to the Jets coach Saleh) his odds go up to 50% chance to stick.

80% chance of sticking. Good receiver who is not in love with contact but Yeboah is talented.

10% chance of sticking. I don’t see Saltes making it even to the practice squad.

10% chance of sticking. Unless Coach Saleh sees something special, he is a cut.

20% chance of sticking. Should be 10% but giving him a little better chance because he was a teammate of Zach’s at BYU.

10% chance of sticking. Always love a local player who makes good but Dwumfour won’t be a Jet.

10% chance of sticking. See above!

50% chance of sticking. Hermanns checks some of the boxes as an NFL offensive lineman. He is developmental and will be a practice squad player if he makes it.

80% chance of sticking. If he makes his first extra point in preseason, he is in!

10% chance of sticking. Special teams is the only way in.

80% chance of sticking. Lindy’s draft magazine lists him as a player to watch:

“scrappy man corner with ideal length and aggression for the job.”

Jets paid a lot for him. I think he makes the 53-man squad by year’s end.

10% chance of sticking. Always love when the Jets get a player from the military. But his skill set is just not there for the NFL.

…..The Jets released WR Josh Doctson,  CB Kyron Brown, TE Connor Davis, OL Leo Koloamatangi, K Chase McLaughlin and WR Jaleel Scott. They placed S Saquan Hampton on the reserve/physically unable to perform list…..Today on Pro Football Talk: “15 years after the fact, former Dolphins coach Nick Saban remains miffed that Dolphins doctors deemed the shoulder of quarterback Drew Brees unfit for NFL competition.”  Hey Nick, let it go already! How many people have a better life than you…..Jets mini camp opens today. Things are moving in a fun direction…..The Chicago Bears have been playing at Soldier Field since 1971, but that's something that could be changing in the near future. The Bears are apparently thinking about relocating to Arlington Heights, which is a suburb that sits roughly 30 miles outside of Chicago…..Of the Jets cuts mentioned above, I liked CB Kyron Brown and WR Jaleel Scott…..The Patriots have signed their first undrafted free agent of the offseason. An announcement on Thursday gave word that they have added former Michigan kicker Quinn Nordin to the active roster. Nordin gained attention as a recruit when Michigan head coach Jim Harbaugh slept over at his house as part of the effort to get him to Ann Arbor…..Sixth-round DT Jonathan Marshall has signed his contract — 4 years, $3.65M…..Jason McCourty will reunite with Brian Flores in Miami. McCourty, the veteran cornerback who previously played for Flores in New England, is signing with the Dolphins, according to Mike Garafolo of NFL Network….. May 12: NFL Release of 17-game regular-season schedule…..After suffering a broken bone in his foot at the New York Jets‘ facility a few days ago, Quinnen Williams has undergone successful surgery according to Tom Pelissero of the NFL Network…..Fift-round CB Jason Pinnock signed his contract-four years, $3.75M….. 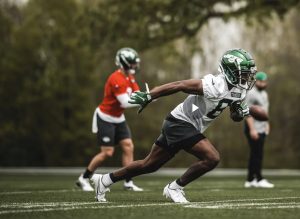