The Jets open against the Carolina Panthers on September 12th. Right now we are just starting June and this I can tell you, the clock is moving a lot faster for Robert Saleh and his coaching staff than it is for us fans. The details for a new coaching staff is endless, and a former head coach once said  “No one is ever ready for their first NFL head coaching job.”

As a New York Jets football fan since 1964 if I had any advice for coach Saleh it would be to emphasize more time in practice on special teams than anything else. This is something I remembered from Bill Parcells that he preached throughout his coaching career. Parcells was a quotation machine but one of my favorites was when he said “keep the foot in football.” This line will never be on the Mount Rushmore of quotes with those of Plato, Socrates or Aristotle. But in this modern era of the NFL with the “read option” or “jet sweep”, one thing is constant. The team that blocks and tackles better and has better field position usually wins. And with better field position Parcells had a theory that every 80-100 yards of field position is worth seven points. He goes beyond just offense and return yardage and details the importance of how a blocked punt can cost a team 50 yards or a punt that the return man did not call a fair catch for can cost an extra 10-20 yards when the ball keeps rolling. Parcells also followed detailed statistics that said offensive drives on a long field (80 or more yards) produce a touchdown only 16 percent of the time. Good organizations spend money and time on kickoff coverage units, and kickers and punters who can place the football inside the 20-yard line.

Here’s a stat I found interesting that Parcells theorized right from an article in NFL.com from 2011:

And by the way, I’ve said it before but if you can, watch a five-minute YouTube clip of Bill Parcells teaching Dedric Ward how to return punts and kickoffs. The clip should be required viewing for all NFL special team players.

The Jets special teams coach Brant Boyer has done an excellent job in the 5 years he has been with the team. Robert Saleh obviously recognized how good Boyer was and retained him. Now both Saleh and Boyer have to build an elite special teams unit. By doing this, it is the clearest way for this young Jets team to be competitive.  I truly believe they started in the right direction with special teams when Joe Douglas became general manager. Drafting punter Braden Mann in the 6th round in the 2020 draft may turn out to be one of the Jets best draft picks ever. I was surprised this year that he did not draft a kicker as the Jets kickers have been a circus of musical chairs ever since they allowed Jason Myers to walk. They did sign SMU kicker Chris Naggar to compete with Sam Ficken. Like many Jets fans I had my eye on Florida kicker Evan McPherson but the Bengals snagged him in the 5th round.

Still the Jets did upgrade their special teams with a few moves. One free agent signing that didn’t have the bells and whistles of a Carl Lawson, Corey Davis, Sheldon Rankins or Keelan Cole was the signing of Justin Hardee from the Saints. Listed as a cornerback, Hardee played wide receiver at Illinois. He was undrafted and made the Houston Texans before signing on with the Saints. This guy loves special teams and most Saints fans consider his loss huge. Early in his career, he blocked a punt in 2017 and returned it for a touchdown. But it is his tackling that is special. According to Jets X Factor, in 2020 Hardee had 9 tackles and only 1 miss on Special teams. His 90.4 PFF (Pro Football Focus) special teams grade ranked 6th-best in the NFL. In his career he has 33 special teams tackles to only 5 missed tackles, a 6.6-to-1 ratio, more than double the 2020 NFL average (2.9-to-1). In addition to Hardee, the Jets signed un-drafted free agent safety, Jordyn Peters, who blocked 4 punts in college and forced a fumble on a kickoff. Peters can be another excellent part of the Jets special team’s unit. The Jets also have an abundant of return guys including Elijah Moore, Keelan Cole and Braxton Berrios just to name a few.

If the Jets focus on special teams it is not as sexy as Elijah Moore breaking a 10-yard slant into an 80-yard TD or a Marucs Maye returning an interception 60-yards for a score. If Robert Saleh wants his team to be competitive in 2021, special teams might be the answer. Great special teams stability can help carry a team year after year. Hidden within all the New England Patriots championships is the fact that they have had only two kickers from 1996-2019,  Adam Vinatieri (1996-2005) and Stephen Gostowski (2006-2019). For rookies and un-drafted free agents, special teams is their pipeline for an NFL job.

Joe Douglas is on the right track building up both lines, but it is the special teams and field position that will yield success for the New York Jets moving forward especially in 2021. 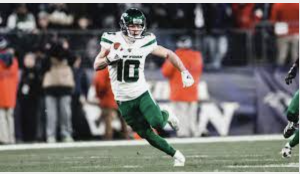 Are you involved in youth baseball or any youth sports like Marty?

Go to his free blog with tips & videos. From t-ball to that Division I  scholarship, go to: