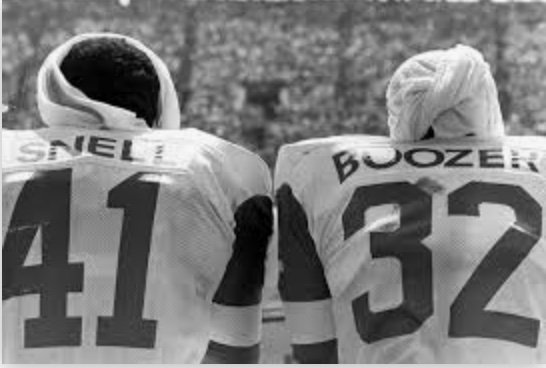 Matt Snell and Emerson Boozer were two of the best players to play for the New York Jets. Growing up as a New York sports junkie, I will always put their names with each other like Seaver and Koosman or Mantle and Maris. Both players were born in Georgia. Matt Snell was born in Garfield Georgia. After a solid career playing for Woody Hayes at the Ohio State University, Snell was drafted in the first round by the Jets while the cross town Giants picked him in the fourth round. He was the first Jet to earn Rookie of the Year honors. Snell and Boozer were players that could run, catch passes and block. He made the Pro-Bowl three times and was All-Pro once in 1969. In his rookie season, he caught 56 balls out of the backfield while rushing for 948 yards in the 14 games teams played back then. His diversity in these skills were excellent, but where I thought he was at his best was picking up blitzes. He had an uncanny ability to not just hit bigger linebackers, but many times, the player he was blocking ended up on the ground. It was in the 1969 Super Bowl win that Matt Snell played one of his best games. He rushed 30 times for 121 yards scoring the only Jets touchdown. He also caught 4 passes for 40 yards. From Bob Lederer’s book “Beyond Broadway Joe” the  ground game of that Super Bowl is described:

Matt said the Jets knew they had to set the tempo for the game. “On the first play from scrimmage, Joe checked off at the line of scrimmage to run a sweep, a call Boozer and I didn’t expect. I had to shift to my right, then run the sweep to the left behind Emerson.” The play proved pivotal. Hill and Talamini executed their blocks. Leading Snell into the hole, Boozer blasted feared Colts linebacker Mike Curtis, and as Snell turned the corner, his knee struck Colts All-Pro safety Rick Volk in the head. It concussed Volk. “I remember coming out of the pileup and saying, ‘These guys aren’t so tough,’” shared Snell.

If you ever watched the replay of that game, Snell’s 4th quarter carries were classic as Namath wanted to keep the ball on the ground as much as possible. Many people thought Matt Snell should have been the MVP of Super Bowl 3 instead of Joe Namath. It was close but I would give it to Namath by a hair.

Emerson Boozer was born in Augusta Georgia. He attended college at Maryland State College (later named University of Maryland, Eastern Shore). In the early days of the AFL, they were more aggressive than the NFL, drafting and signing players from black colleges, looking everywhere to discover talented players. In college, Boozer rushed for 2,537 yards and 22 touchdowns with an impressive 6.8 yards per carry. Even with those stats, the Jets did not draft him until the 6th round. The Steelers also drafted him in the 7th round. Boozer made the Pro Bowl twice. My memories of Emerson Boozer were in his first two years and how close he looked talent wise like another Gale Sayers. His cuts and change of direction moves were incredible but some of this amazing ability was lost because of a horrific knee injury. Still, playing only 8 games in 1967, he led the league in touchdowns scored on the ground with 10. He was also a reliable receiver coming out of the backfield and had 3 more receptions for scores. And, like Matt Snell, his ability for picking up blitzing linebackers was amazing. An interesting statistic about Boozer is that he rushed for 5,135 yards and scored 52 rushing touchdowns. That rate is close to 1% meaning for every 100 times he carried the football, he scored a touchdown. That is a better rate than Hall of Famers Franco Harris, Walter Payton and Emmitt Smith. It was Emerson Boozer along with Winston Hill who threw the two key blocks when Matt Snell scored his touchdown in the Super Bowl. In 2019 Boozer was inducted into the Black College Football Hall of Fame. Unable to attend the ceremony, Joe Namath graciously went down for the induction on behalf of Boozer. After he retired, Boozer did a little work as a CBS commentator and owned both a machine shop and a restaurant. In 1986, he took a job in Huntington Long Island in the parks and recreation department, eventually working his way up to become director. He retired in 2005 but continues to be active in his local community.

There are two games that stick out to me besides the Super Bowl. One game was in 1968. The Jets beat the San Diego Chargers. The score was 37-15 but it was the running by both Snell and Boozer that was incredible. Snell took the bulk of the runs but I remember seeing Boozer blocking on every one of Snell’s runs (18 for 91 yards) pushing his man downfield maintaining his block. Boozer was active also and Snell paid back the favor blocking his tail off for his teammate.

The other game I happened to be at in 1969 when the Jets beat the then Boston Patriots 23-17. Snell carried the ball 23 times and rushed for 109 yards while Boozer carried the ball 15 times for 67 yards. Both players scored a touchdown and again both players blocked for each other’s runs like offensive linemen. Interestingly that game Namath only passed for only 115 yards. It was a classic grind it out ground game for the Jets.

One of the hardest things to do is comparing football players from different eras. How good would Joe Namath have been if the AFL was as offensive minded as it is today? With all the rules protecting the quarterback from getting hit and allowing receivers to run free what might they have done? Imagine Namath throwing to Don Maynard if they couldn’t touch the receiver past 5 yards. As hard as it is to compare, today’s generation of fans would love the way Matt Snell and Emerson Boozer carried themselves on and off the gridiron. They were both 100% professionals and deserve a ton of credit for approaching the game the way they did.