It happened on Sept. 23, 2001, with 5:03 remaining in the fourth quarter of the Jets-Patriots game. Linebacker Mo Lewis slammed into Patriots quarterback Drew Bledsoe along the right sideline at old Foxboro Stadium. That one play will forever be remembered for taking one player out of the game and raising the curtain on arguably one of the greatest careers in the history of the NFL. That moment changed the NFL forever. Lost in that moment is Mo Lewis, and the special person and player he was and still is!

There have been too many New York Jets that I put in the ‘What if” category. What if they played in a different situation, or with a different coach or surrounded with different talent. Mo Lewis (Morris Clyde Lewis 3rd) is one of those players. Mo Lewis was born in Atlanta, Georgia and went to the University of Georgia. He was a third round pick (pick #63) in 1991. That year Russell Maryland was the first pick of the draft. The Jets, without a first round pick took Browning Nagle in the second round. The Cleveland Browns were interested and almost took Lewis in the first round.  Lewis had a hollow bone in one of his thighs and this scared off the Browns.

In his rookie year Mo Lewis started 15 games. Unfortunately for Lewis, the Jets averaged only 5 wins in each of his first 6 seasons. The players and coaches around him were less than average.  A lot less. In the beginning of Mo Lewis’ career, was that dreadful 1996 year when Mo got injured missing several games and the Jets went 1-15 . The next year, when Bill Parcells came to coach the Jets, he not only changed the franchise but also Mo Lewis. Parcells challenged Lewis, frequently getting under his skin. In typical Parcells fashion he learned what buttons to push with Mo and in fact tried to push him into fights in practice just to see how he played when he was mad. It worked, and this motivated Lewis and eventually made him a better football player. Mo Lewis was voted the Jets team MVP twice. He went on to be named to three straight Pro Bowls and he made first team All-Pro in 1998. He was also the Jets defensive captain from 1997-2003. An honor that many take for granted.

Mo Lewis was a player who played a balanced game at linebacker, playing the run very well and he was more than an able cover guy. He was not known as a sack artist though he had 8 in 1997, 7 in 1998 and a career high 10 in 2000. His 52 1/2 lifetime sacks is the most for a Jets linebacker. Unfortunately there is a huge emphasis on sacks by linebackers, sometimes overlooking all around play. The great linebacker of the KC Chiefs Derrick Thomas was a sack machine. Still some knowledgeable football people say that aside from the sacks and the talent around him, Mo Lewis was as good a football player as Thomas. This may sound like a stretch but I would have loved to see Mo Lewis play on some of those Chiefs teams.

My best memories of Mo Lewis was his knack for creating or forcing fumbles and interceptions. Today we see defensive players more concerned with trying to knock the ball loose from a receiver or a running back instead of making the tackle. Mo Lewis was a “throw back” type player, able to stop a running back in his tracks and still force a fumble. In his career Mo Lewis had 26 forced fumbles. That number is more forced fumbles than linebackers Ray Lewis, Brian Urlacher and Mike Singutary had in their careers.

Author Scott Wedell listed his 50 top ranked linebackers in the NFL modern era, which he considers players drafted after 1970. As a nice tribute, Wedell had Mo Lewis ranked as the 41st best linebacker. He had Lewis ahead of other more known names like: Chip Banks, Keith Brooking, Jessie Armstead, Shawn Merriman, Terrell Suggs, Bryan Cox and Bill Romanowski.

For Mo Lewis and Jet fans, getting him in the 3rd round of the draft might have been one of the best bargains of all time! His career 1,231 tackles stood as a Jets record until David Harris passed him. Mo Lewis will always have Tom Brady attached to his name but one doesn’t have to dig too deep to appreciate his career.  My emphasis on NFL players first and foremost is the ability to get and stay on the field. Except for one year, Lewis only missed 1 game! This is incredible to me especially today with players missing games for ridiculous injuries. His impressive record would have been even greater if he had been surrounded by more talented players. Mo Lewis is the type of player you want playing for the New York Jets. Hopefully we can uncover a few more like him in this year’s draft! 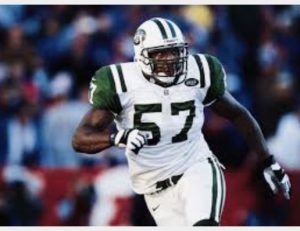