I’ll cherish those moments spent with my idol Don Maynard. One of the greatest Jets of all time.     - Wayne Chrebet

Don Maynard never colored his hair or did crazy end zone dances after a touchdown. You never saw him point fingers or complain to the media that he wasn’t getting the ball enough. All he did was play hard and play great during his 15 year career. He put up gaudy numbers not just for the time he played in, but even for today. Some of his season stats in a 14 game season stand-up in the present 17-game season. He spoke with a southern twang that was more inviting than soft and made whoever he conversed with comfortable and felt like they were talking to their next door neighbor. 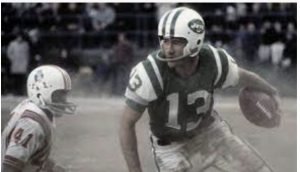 Donald Rogers Maynard was born in Crosbyton, Texas a town with under 2,000 people. His father worked in the cotton business and the Maynard family was constantly moving. He went to high school in Colorado City, Texas where he lettered in football, basketball and track. He went on to play football at Rice for one year, then he transferred to Texas Western College which is now the University of Texas at El Paso. In three seasons there (1954-56) he caught only 28 passes but he averaged an incredible 27.6 yards per reception and scored 10 touchdowns. He also played running back and rushed for 843 yards on 154 attempts for an impressive 5.4 yards average. In addition he returned punts and kickoffs and accumulated 2,283 all-purpose yards plus intercepting 10 passes while playing defensive back.

The New York Giants drafted Maynard in 1957 in the ninth round. In his rookie season he rushed 12 times for 45 yards and caught 5 passes for 84 yards and played on special teams. The Giants later released him and he played one season in the Canadian Football League for the Hamilton Tiger-Cats and he worked in the off season splitting his time as a teacher and a plumber.

In sports, talent is recognized on both sides of the field. It was a sharp Sammy Baugh, New York Titans first head coach who coached against Maynard in college and saw his talent. And like great football minds, he filed it in his head and when the opportunity presented itself Don Maynard became the first player to sign with the Titans in 1960 later to be called the  New York Jets.

Some of the press criticized Don Maynard as an NFL reject. Though he heard these whispers in the press, all he did was come to work everyday and do the best job he could. He worked at his craft spending endless hours practicing his pass routes: stopping, starting and cutting every chance he could get. His hard work paid off and in his first year he teamed up with his wide receiver counter part Art Powell and formed the first professional wide receiver tandem to each gain over 1,000 yards in receptions in a season. The pair repeated this achievement again in 1962.

Don Maynard was making a name for himself in the young upstart, AFL. When a player named Joe Namath became the Jets quarterback, Maynard’s numbers really took off. In Namath’s rookie season Maynard had 1,218 yards on 68 receptions and 14 touchdowns which led the AFL.

He continued to put up incredible numbers and in 1967 had a league leading 1,434 yards averaging 20.2 yards per reception and 102 yards per game. Keep in mind that even though the AFL was a wide open, gunslinger type league, the rules were a lot different than they are today. The quarterbacks were not overly protected back then and the receivers were not given the room they are given today and the bump and run on receivers was a big part of the game.

Don Maynard continued his superstar performance being the main cog for the Jets in their 1968 Super Bowl run. That year he played in 13 games but still caught 57 passes for 1,297 yards and 10 touchdowns with an incredible 22.8 yards per reception. His most famous catch was in the AFL Championship game against the Oakland Raiders at Shea Stadium. Maynard turning his body at the last second, still tracking the football caught a 52-yard bomb that was twisting and turning in the wind every which way after it left Namath’s arm. His stats for that game were 6 catches, 118 yards and 2 TDs. It was truly an unbelievable performance.

So unbelievable that Maynard, though he was hurt in the Super Bowl he was double and triple teamed on every play and did not catch a pass but was the ultimate decoy of the century. Another unbelievable game.

When Don Maynard retired, his 633 receptions and 11,834 yards were league records. They are dwarfed in today’s game but for that time he was an incredible all around football player who never shied away from blocking even with his slight frame. He took great personal pride being the first player to get over 10,000 yards in receiving.

My personal memories of Don Maynard was always seeing him talk to Joe Namath after almost after every play. It became a habit seeing number 13 talking for a few seconds to number 12.  What was he saying to Broadway Joe?

“Joe, run Boozer to the right.”

“Joe, I’m open on the right sideline when you need one.”

I also don’t ever remember Don Maynard dropping a pass. I’m sure there were some but I can’t recall any. I also remember he was in a television commercial for Score hair cream with three other New York Jets. He was introduced as Country Don Maynard.

Don Maynard made the Pro Football Hall of Fame in 1987. His speech was short and to the point with some poetic verses. In today’s game Don Maynard would have fit in perfectly and his stats would have been inflated more than what they were. He reminds me of a smaller Cooper Kupp who combined incredible route running with great speed. And yes Maynard would have been effective running the Jet sweep. Don Maynard died on January 10, 2022 at 86. Though I never was at an induction ceremony in Canton Ohio, I wish I was there for Country Don Maynard. A great football player and a great New York Jet.