“You can't always get what you want, but if you try sometimes,

It was right in front us! The Jets had a huge chance to solidify the offensive line for at least one presidential term and maybe two! Joe Douglas and company did a great job trading up to land Alijah Vera-Tucker the gifted offensive lineman from USC. When day two opened, Teven Jenkins the Oklahoma State offensive tackle was on the board. He was the player not only I but Jets Rewind co-host Ray Clifford wanted. Douglas went with Elijah Moore the all everything receiver from Old Miss. At first we were a little disappointed but in retrospect this was a great pick. He is one of those dynamic players the Jets never seem to get. In the fourth round Michael Carter, the elusive running back from North Carolina was taken Again, another un-Jet like player who averaged 8 yards every time he ran the ball and 10.7 yards when on the receiving end of a pass. He reminds me of a Leon Washington who stops on a dime and can change directions in an instant. Between Elijah Moore and Michael Carter, even if the Jets stink, they should be more fun than they have been in a long time. Here are all the draft picks:

“….excels at attacking the middle of the field against zone looks. He has the burst to separate in man coverage. In 2020 in only 8 games, he caught 86 passes for 1,193 yards.”

A big (6’1” 216 lbs.) strong safety who spent a lot of time inside the box covering tight ends. He will transition to a safety/linebacker hybrid that fits the Robert Saleh system.

A versatile defensive back with excellent speed and good instincts. He is a tough player and plays bigger than his 5’10” 184 lbs. frame. He was also a team captain at Duke.

Pinnock has an excellent blend of size, length and top-end speed for a corner. He elevates well, and he tied for the team lead in interceptions with three last year. He flashes in run support and has good upside when it comes to special teams.

Nasirildeen is a tall (6’3”), strong safety/outside linebacker hybrid with good bulk, excellent length and above-average playing speed for his frame. He's an aggressive and willing run-defender with the strength to play in the box.

Echols is an undersized corner with short arms, quick feet, excellent burst and outstanding top-end speed. He moved from receiver to corner in junior college. He ran a 4.35 in the 40. Had 12 pass break-ups in 24 games. Good upside.

Marshall is quick with outstanding upper-body strength and excellent timed speed. He has good size and gets good initial pop, but he has shorter arms, gets stuck on blocks

…..Keep an eye on un-drafted free agent Hamilcar Rashed Jr., of Oregon State. Had an unexplained unproductive season in 2020 but in 2019 he had 14 sacks and 22 1/2 tackles for a loss…..Jamison Crowder is one of my favorite Jets but it looks like he may be gone after drafting Elijah Moore. And Jets can save a boatload…..After Mike Macaggnan drafted Sam Darnold he followed with: Nathan Shepard, Chris Herndon, Parry Nickerson, Folorunso Fatukasi, Trenton Cannon. What a difference!…..Still a few NFL free agent guards available. Names to keep an eye on: Nick Easton (29), Trai Turner (28), J.R. Sweezy (32), and even a return of James Carpenter (32)…..Western Michigan guard Jaylon Moore went in the 5th round. Was hoping the Jets would get him…..I thought Cleveland had one of the best drafts……Another un-drafted free agent to watch, TE Kenny Yeboah. A converted WR he averaged 19.4 yards/rec. last year. Athlon sports had him projected as high as a 4th round pick….. Jets should have an announcement Monday or Tuesday about Jets rookie camp. Should take place the next couple of weeks.….. 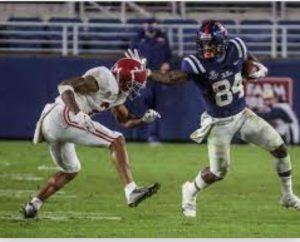