We kept hearing from Joe Douglas that he wants to build through the draft and complement the roster with free agents. He has been active but he missed out on the real need of the Jets. All we heard last year was that he was fascinated with guard Joe Thuney but the Patriots franchised him. Coming into this free agent class, Jets fans all thought we’d have a good shot and should get one of three free agent offensive lineman, Thuney, guard Brandon Scherff or center Corey Linsley. Thuney signed with the Chiefs. Scherff was tagged by the Washington Football Team and Corey Linsley went to the Chargers who seem to know how to build an offensive line. Besides these three I thought that Douglas should have made a strong play for free agent guard Kevin Zeitler who was let go by the Giants. Out of the four mentioned there seems to be a question behind each whether it was Joe Douglas not wanting to overpay, or the Jets did not want to move Connor McGovern from center to guard. Whatever the reason the Jets did not address their number one need unless you count offensive lineman Dan Feeney as a good pick-up, but more on that later. Whether Sam Darnold, Zach Wilson or Justin Fields plays quarterback, it will be more of the same as last year unless the Jets hit the lotto with two offensive lineman in the draft. If Joe could have secured one of these players, the other free agent pick ups would have made all these picks a home run. This isn’t to say his signings were not good, in fact for the most part they were very good but we needed to address the offensive line. And, by the way I’ve heard different reports about how the Jets offensive line improved over the year in 2021 with PFF (Pro Football Focus) grades, rankings etc. Don’t buy any of that baloney! There was almost instant pressure on every play with the Jets offensive line looking slower off the ball than the defense they were playing. It was like the defensive line knew the snap count. Especially the pressure coming from up the middle. I like Joe Douglas as much as any general manager the Jets ever had and I believe he will turn this thing around in the long run.  But I, like many Jets fans, was very disappointed by failing to get a top tier player that could protect the quarterback.

DE Carl Lawson, Prior team Bengals. Three years, $45 million ($30 million guaranteed). Biggest prize for the Jets.The 25-year-old appeared in all 16 games in 2020, finishing with 36 tackles, 5.5 sacks and a career-high 32 quarterback hits. Sacks tends to be overrated. When Jet fans see how quick he gets in the backfield and how disruptive he is, you’ll see why the Jets paid this much.

LB Jarrad Davis, Prior team Lions. Three years, $37.5 million ($27 million guaranteed) . I’ve heard it said that the Jets think this former first round draft pick who was only a part time player last year can thrive in the 4-3 defense. He is suppose to be faster than CJ Mosley but is not a good cover guy which I hate. To me he is an underachiever that the Jets think Robert Saleh can get the most out of him.

DB Justin Hardee, Prior team Saints. Three years, $6.75 million ($1 million guaranteed). My personal favorite. A gunner on special teams, he approaches his kraft like Michael Jordan. He is hard nosed and a great locker room guy. If you go to some of the New Orleans Saints fan message boards, he looks to be the most missed Saint so far besides Drew Brees. Everybody eats at Hardees.

DT Sheldon Rankins, Prior team Saints. Two-year deal worth up to $17 million. Tons of injuries here! Only 26 with a lot of upside.

His best year was 2018. Played and started 16 games. Had 8 sacks and 15 QB hits. Could be a really good pick up but this is right from ESPN Jet’s beat writer Rich Cimini:

“Tore Achilles in '18 playoff. Preventative surgery on other Achilles in '19. Suffered from Haglund's Deformity, which puts stress on Achilles. He says it has been resolved.”

Low risk, possible high reward. Can return punts and kickoffs. Cole (6-1, 194) finished second on the Jags with 55 receptions and 642 yards in the 2020 season. His 5 receiving TDs were also tied for first. He was an undrafted free agent from Kentucky Western. His rookie year, 2017 he had 748 yards receiving.

S Lamarcus Joyner,  Prior team Raiders. One year, $4.5 million. Another one-year contract. Played nickel but is a better fit at safety. At 5’8” this 30-year old is on the small side. Versatility is a theme with some of these free agents, which I like. In the Robert Saleh defensive scheme, look for 3 safeties to be on the field a fair amount of time.

TE Tyler Kroft, Prior team Bills. One year, $1.5 million. Another one of my favorites. This ex-Bill went to Rutgers and is an excellent blocker. We should see more Jet running backs turn the corner in ’21 with Kroft in there. He is 28-years old and besides his blocking he can catch the ball. His best season was in 2017 playing for the Bengals when he caught 42 balls for 404 yards with 7 touchdowns. Ryan Griffin and/or Trevon Wesco could be gone!

OL Dan Feeney, c-g, Prior team Chargers. One year, $3.5 million ($3 million guaranteed). Will get to be known as “Swiss Cheese Dan” when you see how easy defensive linemen go through him on pass plays. In his defense he has  started every game the last 3 years, 48 in total. A better run blocker than pass blocker. He plays center and guard and showed a lot of promise his first two years but the last two he was awful. I don’t think he could block a door right in front of him.

As a Jets fan maybe nothing could satisfy me, but their offensive line still stinks. If you could have just added Kevin Zeitler to this list it would have been great! Now the Jets have to draft two offensive lineman within the first three rounds and hopefully they can start right away. And they should be guards. Rashawn Slater from Northwestern is a natural tackle who has been working out at guard. He is an incredible athlete but won’t be there at 23 when the Jets pick with their second first rounder. A more realistic choice would be USC’s Alijah Vera-Tucker. Another player listed as a tackle, he can easily move to guard. With the Jets 34th pick, if he slips I like guard Wyatt Davis from Ohio State. His 2019 season was better than this past season but he is a road grader. Joe Douglas should get two of them.

The Sam Darnold issue is beyond hope at this point. My co-hosts from the Jets Rewind Podcast, Ray Clifford and Ralph Sharaga were right all along knowing the Jets would not get a 1st or 2nd rounder for Sam. The Jets would be lucky now to get a 4th and might have to settle for only a 5th. It is what it is. Draft a QB at #2 and sign a veteran. How about Alex Smith? Moving forward Joe Douglas should have done better with the offensive line. He didn’t! So now he must strike gold with the draft. The New York Jets saga continues! 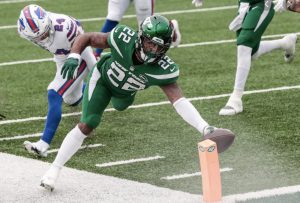