Myth1: “Zach Wilson has only competed against cupcakes.”

In 2019, (before he injured his hand) BYU played Utah, at Tennessee, USC and Washington. And while BYU was over-matched talent-wise in all four games, they managed a split.

Now let's consider the bowl game in December against Central Florida (a solid football program). Remember that game? Wilson carved them up like a Sunday roast. Stats: 24-36 425yds. 3TDs 0 Ints- plus 2 rushing Tds. Turns out, two of UCF's Defensive backs, Aaron Robinson CB and Richie Grant S are projected to go in the 2nd or 3rd round of the upcoming draft. How many Power 5 schools can make that claim. Very few, I would imagine.

Myth 2: “Wilson played poorly against Coastal Carolina. Their only true test this year”

Coastal Carolina was a good team this year. Final rankings in the three polls were 12, 14 and 14. Actually, Wilson had a good, not great, game. Stats: 19-30 240 yards 1TD pass 1 Int. The interception was a Hail Mary on the last play of the half. But what jumps out in this game is the last second drive Wilson engineered. Down 22-17, BYU took over on THEIR OWN 8 YARD LINE WITH 34 SECONDS LEFT! Wilson proceeded to complete 5 of 5 passes (33yds, 12 yds, 15 yds, 15 yds and 16 yds -BTW, almost no YAC on any of the passes.) At that point the clock ran out as his receiver was tackled at the two. I'm not saying Lawrence or Fields aren't capable of engineering a drive like that. We just don't know because their teams were so strong they were never put in that position. Well, actually Fields had one chance against Clemson 2 years ago. I just named 3 games where Wilson did it. Just saying.

Myth 3: “Wilson is a one year wonder. Did nothing before this (his junior)year.”

The two games previously mentioned against USC and Tennessee were in his sophomore year. In his (true) freshman year, Wilson took over the starting job in the 7th game of the season. From that point on, his stats were: 1,578 yds passing, 65.9% completions, 12 td passes 3 Ints. In their bowl game BYU 6-6, played Western Michigan at 7-5. Wilson's stats: 18-18 (that's not a typo) 317yds 4TDs and I don't have to tell you how many Ints.

One final thought on the idea that playing for a Power 5 school makes you a better, less risky prospect.

The following is a list of colleges that have produced QBs who have won Super bowls.

Next is a list of all the colleges that have never produced a Super Bowl winning QB.

I could go on but you get the idea.

Ralph Sharaga, wrote this article. Ralph appears on the Jets Rewind Podcast and has been a Jets fan his entire life.  The Podcast can be heard at: 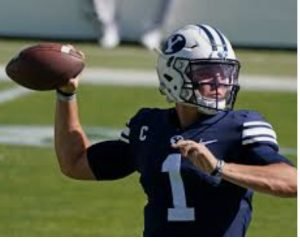 New York Jets Must “Guard” The Fort In Free Agency

Saleh-Douglas Have Years Of Jets Garbage To Undo!