Sunday at 1PM EST is when it all begins! Most Jets fans are feeling an optimism unlike anything they felt in the last ten years. There was some success with Rex Ryan, but I felt the organization still never had an identity. Right now I would say the positive feeling is largely because of Zach Wilson, Robert Saleh and Joe Douglas.

Zach Wilson showed everything a Jets fan would want in the preseason. I know it was against 2nd and 3rd stringers but he can only play against what is put in front of him. His best quality so far is his quick release. If it was not a preseason mirage, this quick release will get him out of trouble when he is pressured. I don’t want to see him being chased behind the line of scrimmage and running out of bounds for a loss when he could have just tossed the ball away. Look for the Jets to open the game with short passes rolling out to either side. It is imperative that the Jets develop a run game (probably first time you ever heard this) so Zach can show his stuff on some play action passes. Make no mistake, Zach will air it out a few times in the game. Carolina defensive end Brian Burns may be the best pass rusher the Jets will see this year. Mike Lefleur may have Zach start with some three step drops so he is put in the best position to succeed. The Jets can win this game but have to get 100 plus yards on the ground to do it.

Robert Saleh comes across like he is too good to be true. He is always saying the right things and the players seem to respond so far! Last year as defensive coordinator with the 49ers, even though they finished 6-10, the job Saleh did on defense with the injuries is one of the better jobs you will ever see. With players on defense such as: Nick Bosa, Dee Ford, Richard Sherman, Solomon Thomas and Ezekiel Ansah missing a large part of the season, Saleh’s defense still managed to be one of the best in the league. The Jets are in a honeymoon period right now so there won’t be much negativity when it comes to the coaching staff. That can change quickly with a four game losing streak. But Robert Saleh seems like the real deal. From my seat there are two questionable items. First why wasn’t he hired by the Detroit Lions? He is from that area and they spoke to him. This doesn’t really matter, but it is just my own curiosity. Second, he is really rolling the dice with his young secondary and linebackers. Nevertheless, there is a subtle confidence that is not swagger but genuine. Right now I am in with Robert Saleh as much as the players are.

Joe Douglas has made some very good moves. He has accumulated numerous extra draft picks for 2022. Of late he got a fourth for Chris Herndon. The Jets have eleven picks in the first six rounds including two in the first and two in the second. But it is his day to day decisions as a GM that I am more impressed with. His move to bring up Josh Adams to the 53-man roster, knowing the Ravens were in the market for running backs was both smart and proactive. And cutting Bless Austin, though a surprise tells us he wants certain athletes and won’t hesitate to cut a starter we wouldn’t expect.

These three are really the faces of the New York Jets today. Will it be successful? And if the Jets go through a 4-13 season are we going to know if we are on the right track? I can’t help but remember what the Supreme Court Justice Potter Stewart said for a definition of obscenity: “I know it when I see it.” No matter what Jets record is this season, we’ll know if they are headed in the right direction if they pass the eye test.

Growing up as an NFL fan I used to watch the Allie Sherman show. The former New York Giants coach would stand in front of a blackboard and explain the different formations and use different terms. Hearing things like blitz, red dog, strong side and weak side, I figured I knew it all. Today it’s a lot more complicated. I’ve listed five terms that are used on offense and defense. Hopefully this will help you like it did me:

…..Josh Adams averaged 3.6 yards after contact in ’20. Derrick Henry’s best year he averaged 3.2 yards after contact…..Under the radar is that all the Jets WRs are excellent blockers and take pride in that skill….Jets signed an OT to their practice squad on Friday, Ross Pierschbacher…..Two players on the Panthers that worry me: DL Brian Burns and former Jet Robby Anderson…..If it was me I’d start Fant over Moses at RT…..With Jamison Crowder out and Keelan Cole a game time decision, I expect big days from Corey Davis and Elijah Moore…..I think that there is unspoken pressure on Mekhi Becton to have a good game and get off to a good start this season….Never mind the vaccine, after seeing Thursday’s game it should be mandated that everyone go on the TB12 diet….. 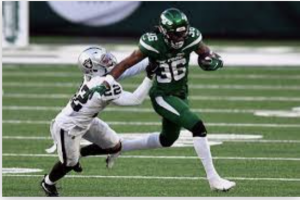