Since I found this draft simulator online, and figured out how to use it, I’m done. I will have to enter rehab soon because I can’t get enough of it and will have to go cold turkey after the draft. This 67 year old Jets fan now goes to bed holding my iPhone and does a minimum of five mock drafts before shutting my eyes. I love the intricacies of trying to get players I really like.  Now that Sam Darnold has been traded, everything is the NFL draft. Will Caleb Farley fall far enough for the Jets to nab him in the second round? After Penei Sewell and Rashawn Slater are picked, can the Jets nab Samuel Cosmi or Christian Darrisaw to shore up their swiss cheese offensive line? Or if one of my favorite backs Najee Harris is around, should the Jets pick him? Ralph Sharaga one of my Podcast co-hosts always tells me running backs should not be drafted in the first round. As Ray Clifford my other co-host always tells me, don’t pay attention to players falling in the mock drafts. Good advice that I usually throw out the window when I’m picking. With the help of the draft simulator, here is my Jets  mock draft 2.0 without any trading.

Is it me or is the line “he checks all the boxes” overused. Nevertheless Wilson is suppose to be the real deal, but again, until he does it on Sundays in the NFL, it is as big a crap shoot as anything else. And by the way, if Zach throws a pick six on his first NFL pass, I’m packing it in.

I could have gone a few different ways with Najee Harris and Creed Humphrey still on the board. Jenkins is listed at tackle but has played guard.  He is very quick off the ball and will probably play guard in the NFL. He is an excellent run blocker who loves to finish off players driving them into the turf.

Had a better 2019 than 2020 but if you look at some of his blocks in the Clemson game, they were more than impressive. Davis was a consensus five-star recruit who was the number one ranked guard in the 2017 cycle and the 24th nationally ranked recruit. He started 14 games in 2019 and 8 in 2020. And anyone who is the grandson of Hall of Famer Willie Davis can play on my team. Both Davis and Jenkins, if picked, should start from day one.

Some scouts see him as a slot corner and consider him a little undersized. I don’t! He can start and is a vast improvement over Bless Austin. Molden is a relentless tackler and depends on instincts more that athleticism. He loves competition and has a little bit of Ashtyn Davis in him as someone who can play multiple positions.

Love this guy! If Joe Douglas likes leaders, Wallace is special. He is coming off a torn ACL and has done well. He is considered an inspiration to all his teammates on his drive and leadership. Found this blurb from Tony Pauline:

“Dynamic wideout with an all-around game. Quickly releases off the line of scrimmage, sells routes, and consistently separates from defenders. Tough, does not back down from a challenge, and comes away with the difficult reception.”

His ’19 season was better than his ’20 year but playing with his wrist in a cast may be the reason. One word to describe his play: “burst.” He has an incredible burst to the ball. And behold Jets fans, here is a linebacker that can actually cover a running back on a pass route. Only concern is he has played in only 19 games.

Great size at 6’ 4”, 256 pounds. A streaky player. Recorded 71 tackles, 15 for a loss, 10.5 sacks, and five forced fumbles while representing the Fighting Irish. Was a 2020 Honorable Mention for the All-ACC Team and was named a team captain by the Notre Dame coaching staff and players. Joe Douglas loves captains. Say his name 5 times fast.

I would have picked a tight end earlier but I have a funny feeling Chris Herndon playing for Rob Saleh could become a force. But Morris could be a steal at this spot. Morris is a good blocker and despite average speed, still has some very good burst and good YAC. He will drop an occasional pass but as a three year starter, he has very good equity when it comes to playing time.

6th Round, (154th pick) Josh Imatorbhebhe, WR, Illinois This USC transfer is excellent on contested throws. Plays to his size (6’2” 220 lbs.) and turns upfield after the catch, working to pick up yardage. Tough to bring down in the open field. Adjusts to the errant throw and looks the pass into his hands. A depth pick with good special teams potential who can catch the home run ball.

This tall safety (6’3”) had excellent 2018, 2019 seasons with projections of a 2nd or 3rd round pick. Injuries derailed his 2020 season and when he came back, he wasn’t the same player.  His scouting report read:

“Athletic cornerback with nice size but an unpolished game. Quick to read and diagnose, possesses outstanding length, and works hard making plays. Jams receivers at the line of scrimmage, uses his large frame to box out opponents, and physically beats down pass catchers to defend the throw.”

This is a big hit or miss pick.

I tried to fill needs with great athletes and players who love football. If defensive backs Caleb Farley or Greg Newsome falls, the Jets have got to jump on one. DB’s are at a premium this year and once you get past the second round, unless you find a diamond in the rough it will be tough to get a solid starter. We’ll have another draft in our next column.

…..…..According to Brian Miller the Miami Dolphins most certainly have at least three players at the top of their draft board or they wouldn’t have traded back to 6. With the draft now weeks away, they could make another trade if picks four and five don’t go their way…..Among the Free agents still available that are interesting for the Jets: DE Jadeveon Clowney, LT Eric Fisher, G Trai Turner, CB Richard Sherman, LB Avery Williamson and G Nick Easton……Rumors have been running now for a week or so about the Falcons wanting to move out of the four spot. No one is talking about the Bengals trying to move out of five and with good reason. The Bengals are not taking a QB and more than likely want either Ja’Marr Chase or Penei Sewell, maybe Kyle Pitts. The same trio that Miami presumably is interested in…..Jets ESPN beat writer  Rich Cimini thinks Alex Smith, Teddy Bridgewater and Garner Minshew are better options for the Jets than Hoyer. Keep on eye on Minshew……Several Patriots fans are looking toward the draft for their team to find their solution at quarterback. Former Patriots receiver Deion Branch believes they already have their answer in the building. The Super Bowl XXXIX MVP thinks Cam Newton will have a better second season in New England than his first season…..GM’s like Joe Douglas love extra draft picks. He might not be through accumulating picks. Watch him on draft day. He loves to work the board…..Jonathan Kraft, who is also the president of The Kraft Group, believes that vaccinations and herd immunity will allow for Gillette Stadium to be at full capacity for this upcoming Patriots season…..I’m hoping Denzel Mims has a breakout season. I’ve told many I think he is a budding superstar. I have a lot on the line….. 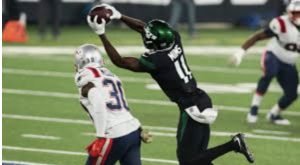