May your hands always be busy

May your feet always be swift

May you have a strong foundation

When the winds of changes shift

The Jets have had some luck drafting in the 4th round. Bilal Powell, Dwight Lowery, Brad Smith, Leon Washington and Jericho Cotchery were all drafted in the 4th round from 2004-2011 which is pretty good. Jets fans all know the history of 2nd round draftees.

Christian Hackenberg, Devin Smith, Jace Amaro, Geno Smith, Stephen Hill and Vlad Ducasse all went in the 2nd round from 2010-2016. You can do all the research in the world but the old saying in sports, “I’d rather be lucky than good” is never truer than with the draft.

In the Jets Rewind Mock Draft 3.0, using the draft simulator, I decided to do trading. With trading, I want to accumulate extra picks this year.  My goal in this draft is:

3) A few underachievers that I’m putting my money that coach Saleh can get the most out of.

This is the one pick that stays constant in every mock draft moving forward. If you haven’t done it, Google Chris Simms evaluation of Wilson. Good stuff for Jet fans.

Had three offers for the 23rd pick to move back. I negotiated with Cleveland, the only team that keeps me in the first round. I accumulated picks 110 & 169 for moving back 3 spots.

I could have taken Wyatt Davis but took him in 2.0. Leatherwood is solid.  Played right guard as a sophomore and moved to left tackle his final two years. Athletic left tackle prospect with a large upside. Sets with a wide base, blocks with leverage, and stays square. Fires off the snap into blocks, keeps his head on a swivel, and displays excellent blocking vision. Explosive, quick out to the second level, and easily adjusts to hit a moving target. He should start for the Jets from day one. I like him at guard.

You may not have heard a lot about Zaven Collins but he is a beast! He is rated as the 22nd best player in the country by Athlon Sports and the #1 inside linebacker. I don’t see the Jets keeping CJ Mosley after 2021 and Collins is too good to pass up. In his three seasons at Tulsa, Collins has 29 tackles for a loss and 5 interceptions. He has incredible lateral sideline to sideline speed and can cover tight ends and running backs in pass coverage.

Moore is just too dynamic to pass up. He is  an explosive, game-breaking skill player who can score from any point on the field. Moore displays tremendous initial quickness with a burst, has a second gear, and runs away from defenders in the open field. A great YAC player who is rated as a late 1st round pick, so great value here.

Rochelle is a risk taker but if he can adjust his game, he can be a starter, Nice-sized corner who flashes next-level ball skills. Displays good instincts and awareness, is very effective facing the action, and possesses a closing burst of speed. Keeps the play in front of him, engages receivers at the snap, and stays with assignments.

I love the number of games Adebo has played already. He was a three-year starter at Stanford who decided to opt-out last season. Performed brilliantly as a redshirt freshman, leading the nation with 24 pass breakups. Tall, long corner who flashed the ability to shut down opponents in the past. Physical, battles opponents and beats down receivers to defend the throw. His play was erratic the last two years. Let’s see if Saleh & Co. can make him one of the steals of the draft.

Christensen was a solid blindside protector for Zach Wilson. I had him as the 15th best tackle in the draft.  He offers starting potential at the next level if he improves his playing strength and hand use. Might be a slight reach in the 4th round but this should make Zach happy.

One of the biggest underachievers of this past college football season. Had he entered the draft a year ago, he would have been a first or second round pick. According to Jets Rewind’s Ray Clifford,

“Wade was excellent playing the inside. When they moved him to the outside, he looked lost.” Still he has ability you can’t coach.

Moore is a short, squat lineman with above-average movement skills and a large upside. He needs to finish his game, but he’s a late-round pick with scheme versatility who could develop into a starter. He is a wide-bodied, explosive blocker who shows ability at the line of scrimmage and at the second level. Sets with a wide base, bends his knees, and shows strength at the point. Moore is my ode to another Grambling graduate, NY Knicks Willis Reed. One of my childhood heroes.

You like sleepers Jets fans? Don’t tell your Dolphins fans about this player. Eubanks looked like he was developing into a top-100 pick off the 2019 film, but he struggled last season along with the entire Michigan offense. He possesses the size, blocking ability, and pass-catching skill, to play at the next level. He’ll be a steal in if the Jets can land him here.

Bradley-King turned in a solid season after transferring to Baylor, then flashed during Senior Bowl practices. Slightly undersized edge rusher who gets the most from his ability. Quick off the snap, plays with terrific leverage out of a three-point stance, and effectively uses his hands. Keeps his feet moving, possesses good change-of-direction skills, and fluidly chases the action laterally. Flashes pass-rush skill, shows speed off the edge, and shows effectiveness out of a three-point stance as well as standing over tackle.

More comfortable in a 3-4 defense is only negative but Saleh & Co. should nab him late if available. Hard-working, undersized linebacker who is best defending the run. Patient and stays with assignments. This is a value pick and someone who will excel on special teams.

This could be another late round steal. Except for missing a few games late in his Notre Dame career due to an appendectomy, Kraemer was a terrific college blocker and is an underrated guard prospect for the NFL. He has athletic and scheme limitations but could start in a power gap offense.

You heard of the Idzik 12? Well this is the Schupak 13. I tried to balance the needs throughout the draft. I might have gotten another OL earlier but I’m fascinated with Rondale Moore. I like the idea of accumulating picks and remember former Jets executive Dick Haley when he gave his assessment of moving down in the draft he said,

” Never move too far down and come away with some chips that can be used later on.”

We are getting closer to draft day. Rumors will start flying but those usually come from team low level employees or agents trying to maneuver for their own benefit. These are fun times! Go Jets! 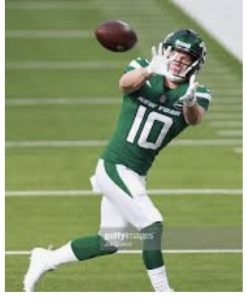 New York Jets: The Position No One Mentions