The Jets are 2-0 this preseason but we all know that records mean nothing in August football. What matters is what we are seeing on the field. With regard to Zach Wilson, it has been pretty good. Never mind that it has been against the opponent's second team. He looks in command and though he may lock onto a primary receiver, the good overwhelms everything else. So far he has checked all the boxes seeing the field, hanging in the pocket and leading his receivers almost to perfection. My favorite look of Wilson is his quick release. His two quick passes he made in a row at the line of scrimmage against the Packers validated this skill. As important as his quick release is, now it becomes a more valuable weapon. With offensive linemen going down like ducks at the carnival (Alex Lewis, Cameron Clark & Conor McDermott), Wilson’s release will bail him out of some tough situations when he is pressured. Keep in mind that there are various types of speeds in the world of the NFL. There is practice speed, preseason game speed and regular season game speed. Zach has yet to see regular season game speed. It is still way too early but as we mentioned on our Jets Rewind Podcast, Robert Saleh is doing the kid right by having him take most of his snaps against the Jets first team defense in practice. Wilson will have his ups and downs in 2021. If you ask most coaches, they will tell you that the jump from year one to year two is huge for young quarterbacks. Listening to Chris Simms and Tony Romo, you’d swear Zach Wilson is the second coming of Dan Marino. This comparison it too soon and the kid doesn't need any additional pressure at this point.  I love what I see so far. I love his pocket presence, I love the chemistry he is building with Corey Davis. I love his coolness when under pressure. But I have lived through this before seeing too many “ the next” Jets quarterback and then going back to square one after it didn’t work out. I’ll always remember how ecstatic I was like most Jets fans when Sam Darnold dropped in the draft and he was ours. I’m keeping my excitement for Zach Wilson in check but this I can tell you, the stars seem to be lining up for the Jets to turn this franchise around. As a former Jets coach once said when asked about one of his players, “I wouldn’t put him in Canton yet.” But for the  umpteenth time, it does seem different with Zach Wilson!

Carl Lawson went down earlier this week and all Jets fans felt awful. With Robert Saleh, Joe Douglas and the whole new regime, we all thought every minute would be different. And we were getting past that: “Now what’s going to happen next?” moment Jets fans have lived with for decades. Lawson was having an incredible preseason. All we heard every day out of practice was Carl Lawson-Elijah Moore, Elijah Moore-Carl Lawson. It is a devastating blow to a young man who puts a ton of work into his craft and keeps himself in incredible shape. We go into Green Bay and cannot get any type of pass rush. I am giving Zach Wilson more of a pass going against the second team than the Jets defense that was doing the same. I know Quinnen Williams wasn’t playing but with the Jets young cornerbacks, the front four has got to get something that resembles a pass rush. At this point in the summer, team defenses are usually ahead of the offense. What we saw against Green Bay from the Jets front four was not good. I don’t think Robert Saleh and Jets defensive coordinator Jeff Ulbrich want to get into a blitz heavy defense a la Rex Ryan-Todd Bowles but they will have to make some adjustments. And I know Jets fans like myself are high on Bryce Huff but he is not the lone answer. And now all of a sudden the injured free agent Vinny Curry becomes a valuable commodity. He will help.

The pass protection early in the game was good! Zach Wilson had enough time to set up unlike last year when it seemed the pocket collapsed as soon as the ball was hiked. Joe Douglas has to make sure the Jets have depth on the offensive line. No matter how quick of a release Zach Wilson has, if the OL is bad, it can lead to a young quarterback’s ruin. The Jets need Alijah Vera-Tucker back. I cannot find out why Morgan Moses did not suit up for the Green Bay game. Hopefully someone can step up out of: Chuma Edoga, Jimmy Murray, Grant Hermanns or Tristen Hoge. Against Green Bay, Murray did play some guard and he looked okay. Hermanns was awful. One other offensive lineman to keep an eye on is David Moore. He is a rookie from Grambling who I liked coming out of college. For some unknown reason Carolina let him go. He was claimed by numerous teams but the Jets waiver position was higher than the rest, so they got him. Stay tuned. And I’m telling all Jets fans this team will go as far as the offensive line takes them. To me it is the most important position(s) for an NFL team.

…..Trevon Wesco had a nice reception on a 17 yard play action…..Braden Mann continues to put that excellent back spin on his punts…..Tyler Kroft seems to have taken the lead for tight ends…..The Jets running back by committee is fine with me with what they have…..I got on Cory Ballentine last game but his kick off return was almost spectacular…..I would say it’s okay for kicker Matt Amendola to sign his apartment lease…..JT Hassell (#49) had a sack against the Pack. I’m pulling for him. He was born with only 2 fingers on his left hand….Even though Lamar Jackson had a nice INT, I think it’s time for him to go. The Ravens should pick him up…..The Jets backup QB situation is a disaster waiting to happen…..Zach’s line: 9-11, 128 yards, 2 TDs, 154.7 passer rating….Friday it’s the Eagles at 7:30. Jets have two scrimmages with them this week. Please no injuries….. 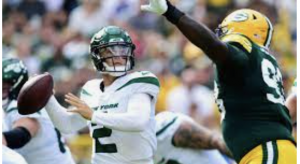