As the Jets get ready for the Philadelphia Eagles Friday night, the words of the week are “ an injury free” game. As much as the Carl Lawson injury is devastating, and and I hate to simplify and sound too cliche”  but its a big part of professional sports. I take injuries to my team personally and remember exactly where I was when: Joe Namath took a hit from Mike Lucci, Vinnie Testaverde tore an achilles back peddling and even when I got the text that Sam Darnold had Mono. I could go on and on but what’s the point. I can tell you that last year when Robert Saleh was the defensive coordinator with the 49ers, when Nick Bosa and Solomon Thomas went down against the Jets, he somehow patched together a good defense. The 49ers went on to have the fifth best defense in the NFL. It was a job well done by Saleh. This is what NFL coaches do. They plan for worst case scenarios. They adjust and proceed. Besides the team and fans, there is very little pity from everyone else in the league when someone gets injured.

I haven’t heard what the plan is but I would rather not have any of the first team on the field against the Eagles Friday night. With the preseason down to three games, I’m seeing a new trend developing. Teams are supplementing preseason games with scrimmages with other teams. I predict the NFL will quickly cut down the preseason to two games. Despite the Carl Lawson injury, coaches seem to have more control of these scrimmages, being closer to the action and not dealing with the clock. Coaches can also stop the action for teaching points. Plus they love having their quarterbacks wearing a red “no hit” jersey. Look for some teams to rest their starting QBs in all preseason games so they know they won’t get sacked. The team scrimmages affords starting quarterbacks to get action and cut down on the odds of being injured. Maybe this is why we are seeing teams this year rest their starting quarterback. But make no mistake the owners won’t just give up the money a preseason game makes. They’ll trade off going down to two preseason games for 18 regular season games. The NFL player’s association will want to expand the roster and the owners will eventually agree.

I am an envious type of Jets fan. It always burned me up when the Patriots Tom Brady would have enough time in the pocket to make an omelet. The Jets quarterback(s) always seemed to be dealing with a collapsing pocket almost as soon as the ball was hiked. For years people I know up in New England would tell me it is their offensive line coach Dante Scarnecchia. Except for two years in Indianapolis, Scarnecchia was with the Patriots from 1991-2019. I was probably one of the only Jets fans every year hoping he would retire. When he did I celebrated! Now my Podcast cohosts Ray Clifford and Ralph Sharaga (who follow every QB) tell me Mac Jones stands tall in the pocket and has all day to throw. I know it is preseason but give me a break. And are you getting as sick and tired as I am now with the Jets not making a 3rd and 1 or 4th and 1? Somewhere down the road if the Jets are going to be a contender they are going to have to get that one yard more often than not.

Connor McDermott went down with a knee injury against the Packers and had to be carted off the field. Dan Feeney is not very good and does not provide any depth. Today Mekhi Becton went out with a head injury in the Eagles scrimmage. The Eagles first team defense was making mince meat out of the Jets offensive line. In particular Feeney and Morgan Moses were getting roasted over and over. I know the line did pretty well in the first two games but I’m worried. Especially with Zach Wilson looking like the real deal. If he gets hurt, it’s not good. Next year the Jets have 4 picks in the first 64. I’d like two offensive lineman from those 4 picks. If Becton is okay for the opener, with Vera-Tucker back the Jets are not in awful shape. It is the depth that I’m concerned about. The Jets have got to keep their franchise quarterback protected and Joe Douglas knows this.

A few weeks back on one of our Jets Rewind Podcasts, all 3 co-hosts picked a position going into camp that fascinated us. I picked running backs but after 2 preseason games, it’s the Jets young defensive backs that have caught my eye. Of course the games are meaningless and in Robert Saleh’s defense, the pass rush is a big part of its effectiveness. And without Carl Lawson and now Vinny Curry, there will be more pressure on the DBs. But so far I like what I see. Second year player Javelin Guidry, the undrafted free agent has shown he belongs in the NFL and has been good defending the slot receiver. His competition, Michael Carter II has also shown ability with limited action against Green Bay. I really like what I see from Brandin Echols, the rookie from Kentucky though he also got injured in Tuesday’s Eagles scrimmage. Isaiah Dunn the undrafted rookie from Oregon State struggled in the Packer game but if he shows enough, he has a real good chance to stick. Jason Pinnock has not really played but he has also shown ability in camp. I am not a big fan of Lamar Jackson and I think his days as a Jet are numbered. Overall I have been pleasantly surprised by what I have seen even with the small sample size. Even against second and third teams. Bryce Hall and Bless Austin will probably be the opening day starters. But don’t be surprised if around the bye week one of the young players steps in for Austin. I would say that Echols (if healthy) or Pinnock may rise up and take over for Austin. This should be interesting even with the lack of a pass rush. 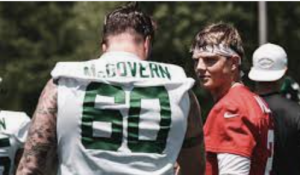