The last preseason game reminds me of visiting a relative you detest. You know you have to go and when you’re in the car on the way home, you have a feeling of relief that you can’t share with your spouse. This was my exact feeling after the Jets made the two-point conversion to end the evening in a tie. By the way, the greatest rule ever made by the NFL was that preseason games can end in a tie. The Jets and Eagles ended the game in a 31-31 tie with an exciting Hail Mary pass from James Morgan to Kenny Yeboah. Coach Robert Saleh made a game time decision not playing Zach Wilson and going with Josh Johnson (7-8, 73yds. 1TD) and Morgan (13-23 155 yds. 2TDs, 1-INT). Now the Jets have till Tuesday 4pm EST to get down to their 53-man roster. With this being another Covid conscious year, the practice squad is expanded to 16 players giving teams some added flexibility. Fans like myself get to play general manager and we all think we know better than Joe Douglas, Robert Saleh, Matt Lafleur and Jeff Ulbrich. We all call up our Jets buddies questioning why they kept this guy and why they cut that guy. A number of things came out of the last preseason game and younger fans don’t remember, but teams used play six of these water board torture exhibitions. I had mentioned in my last Jets Rewind article, and it was discussed on our Podcast, coaches will move to have these team scrimmages that the Jets had with the Packers and the Eagles. The financial logistics will have to be worked out but it’s coming along with an 18th game.

With CJ Mosley taking the night off, the tackling exhibition by the Jets especially in the first half was atrocious. After Jarred Davis got hurt, the whispers were that Saleh would start two rookies at linebackers with  Hamsah Nasirildeen and Jamien Sherwood. Either these two had a real bad game or this has to be rethought. Sherwood especially made the Eagles running backs look like Jim Brown breaking tackles. The secondary was not much better and could not be counted on to cover up the linebackers lack of finishing the play. In fact in the first half the Eagles seemed to have their way with the whole Jets defense. And as much as I touted Bryce Huff, he alone is not a pass rush threat. On Tuesday Joe Douglas has got to come up with someone on the waiver wire or by a trade to get someone who can generate a pass rush. As far as the linebacker situation, I would start Blake Cashman. He is a little more experienced and so far he seems to have overcome his injuries. We just have to see how long that lasts. Cashman has made the most of his time on the field and is deserving to start. We have heard about Sherwood’s football IQ and Nasirildeen’s speed, but both players seem too overwhelmed to be effective starters at this point. Hopefully I am wrong about them and  the Eagles game may have been an anomaly and they will be solid this year.

James Morgan was sacked twice and Josh Johnson once but the pass protection actually looked pretty good. The Jets got 219 passing yards and had 175 rushing yards. The one thing I got from the preseason is that in my mind there is no doubt that Ty Johnson is the best running back on the team. I’m a huge Michael Carter fan I want La’Mical Perrine to be better than he is but I have to go by what I see. And right now my depth chart for running backs would look like this:

Josh Adams has got to make this team. He has been effective every time he is in the game. Whatever the Jets decide is fine as the gap between each player is not too big. I just hope somehow the Jets keep all of them. If they don’t, Josh Adams may be the odd man out just because Perrine is a Joe Douglas draft pick.

The wide receiver situation is deep. Very deep. Unfortunately there are going to be some moves that people don’t agree with. All I know is Braxton Berrios has got to make the team. At this point I love Jamison Crowder but don’t be surprised if he is trade bait before the regular season starts. Here is how my depth chart for the wide receivers look:

I don’t think they will keep seven wide receivers which is why I think Crowder may be gone. If they do trade Crowder, this opens up a spot for Vyncint Smith who has looked real good since last year including special teams, blocking and receiving. The unknown is what’s going on with Denzel Mims. He may be a surprise cut or be traded but that would be a mistake.

…..Jimmy Murray the back-up center made some mistakes but he had some excellent blocks…..Josh Johnson is the back-up. It’s not even close. I don’t care who they cut with White or Morgan…..Speaking of James Morgan, I haven’t seen one inch of progress from one preseason game to the next. A wasted draft pick…..DL Tanzel Smart is so quick off the ball, it’s scary. Room at DT is limited so try him at guard a la Brandon Moore…..Kenny Yeboah should be a practice squad player…..Daniel Brown should be gone but Chris Herndon with a quiet camp should make the team…..OL David Moore saw action and held his own…..I won’t lose one minute of sleep if the Jets cut Joe Feeney…..I hope during the regular season Elijah Moore is all he is suppose to be….. WR Jeff Smith will probably be gone. But this UDFA QB from Boston College is an NFL player…..I love watching Josh Adams carry the ball. When he gets up a head of speed, watch out….Carolina has receivers Robby Anderson, DJ Moore & Terrace Marshall Jr. and a good offensive line. No excuses for Sam Darnold. Can’t wait for opening day. Sunday Sept. 12, 1pm, CBS….. 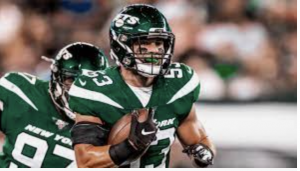