As we close out the rookie workouts in Indianapolis, Jets coaches and fans should not drink too much of the “Combine Kool Aid.” Players with surprising 40-yard times and impressive vertical leaps will move from day 3 to day 2 prospects. Some will even move from day 2 to day 1; and this without even putting on pads. While watching the Combine and listening to the hosts and co-hosts, if I hear the term “athletic freak” once more, I’ll freak out myself! General Managers are always tempted to consider potential based on athleticism, rather than what the game films show them. I am very confident that Joe Douglas will not make the same mistakes made by former Jets general managers and other NFL teams.

If you don’t remember or never heard of them, names like:  Kentwan Balmer, DE, first round pick by the 49ers in 2008, Derrick Harvey DE, first round pick by the Jaguars also in 2008 and Jon Baldwin, WR, first round pick by the Chiefs in 2011, all three were coined the “athletic freak” label along with that other regular phrase we hear “workout warriors.” In Baldwin’s case, it was his 42-inch vertical  jump and his below 4.5 40-yard dash which is impressive for a 6’4” player. In Derrick Harvey’s case, his 4.7 40-yard time for a defensive end weighing 271 pounds had defensive coordinators drooling leading up to draft day. Like Harvey, Kentwam Balmer’s size at 6’5” 317 lbs. was impressive enough for a defensive tackle. Combining his size and running a 5.11 40-yard dash, with a 29-inch vertical leap was everything NFL teams are looking for. Size combined with great athleticism. 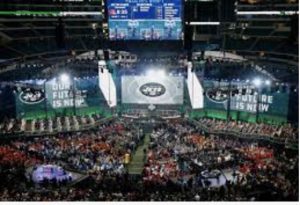 How much consideration should coaches take from how high a player jumps in shorts or how long his arms measure? To me, game film is still the best method to evaluate players. I’ve told the story before about how Bill Parcells and Bill Belichick when evaluating players love to dig deep finding high school tape of a player they were interested in. They would then look for a game that the prospect’s team was getting blown out of and evaluate him closely on every play in the fourth quarter. Did the player still care? How soon did he give up? There is no perfect science to the NFL draft. You and I might do just as well throw darts at pictures of Chris Olave, Garrett Wilson and Treylon Burkes to select a pick.

A few years ago when I was doing my own talent evaluation. I was trying to find some hidden gems at small schools. Films were hard to come by but I put a lot of time into it. I was then thrilled that the Jets picked up Dylan Donahue from West Georgia, in the fifth round of the 2017 draft. He was a player I really liked. It ended up his only claim to fame in New York was driving under the influence the wrong way in the Lincoln Tunnel. Who knew? I’m glad I kept my day job.

Joe Douglas will do all the necessary homework that needs to be done. His 2021 draft was very good. My feeling is general managers earn their stripes in the 3rd, 4th and 5th rounds. In the first couple of rounds, most teams have similar evaluations. No matter how much homework you do on a player, you can never get inside the player’s head. The Titans drafted offensive tackle Isaiah Wilson in the first round in 2020. After falling asleep in multiple team meetings and not producing on the field, he was cut and has since been cut by the Dolphins and Giants.

As far as our own green and white, we’ve been down that Vernon Gholston road over and over again. We saw 6’4” Stephen Hill run a 4.36-second 40 at the combine only to catch 45 passes over two years after being taken 43rd overall. Darron Lee, Calvin Pryor, Devin Smith, Jace Amaro, Dee Milliner, Quinton Coples, Kyle Wilson and everyone’s favorite Christian Hackenberg are part of a list that goes on and on.

The draft is less than two months away. My preference in this draft has been to trade down but most teams want to do the same thing. With the draft capital the Jets have,  I’ll say what I say every year, this is the most important draft in Jets history. Get the dart board ready!

On March 16th, the NFL league year begins. Joe Douglas doesn’t go for the big splash free agents. We probably won’t see the Jets chase the gifted Patriots cornerback, JC Jackson or Green Bay wide receiver Davante Adams. The Jets will be active and sign some players. Keep in mind that it is a tougher sell for a Zach Wilson led team than it is a Joe Burrow led team. But I am sensing a change in the air. The Jets have become a somewhat stable team. Joe Douglas and Robert Saleh are showing excellent leadership. The locker room and culture is trending in the right direction. The Jets may never become as attractive a destination as the Dallas Cowboys but I like what I am seeing. My wish list for free agents are: WR Allen Robinson, CB Stephon Gilmore, SAFETY Marcus Williams, EDGE Chandler Jones, OLB Nicholas Morrow, G Laken Tomlinson. Joe, give me three of them.

It was announced this week that the Dallas Cowboys will be releasing their wide receiver Amari Cooper as a cap casualty. Joe Douglas has got to kick the tires on this. Cooper is 27 years old and has five seasons of 1,000 plus receiving yards. Keep in mind that I don’t expect the Cowboys to let Cooper go for nothing. Last year the Raiders announced they were letting center Rodney Hudson go. They ended up trading him to Arizona with a 7th round pick for the Cardinals 3rd round pick. So in essence, the Cowboys were saying to all the NFL teams, “What is your best offer for Amari Cooper?”  Could the Jets pick a player as good as Amari Cooper in the 3rd or 4th round? I don’t think so.

…..Mike White will probably be tendered with a 5th round pick. Big mistake. He’ll get signed by someone else…Treylon Burks is dropping on the draft prospect chart for not running under a 4.5 40-yard dash. He and Chris Olave are my two favorite receivers…. If WR George Pickens is available in the 2nd round, he is worth considering …..As the draft approaches keep in mind that Joe Saleh puts a premium on a pass rusher rather than a shut down corner….Don’t believe all the negativity on prospect Kayvon Thibodeaux. If available, the Jets have to take him…..Jets picking up Quinnen Williams 5th year option. No surprise here…..I hope the Jets resign Fatukasi…..If I’m the Jets, I don’t go near Derek Stingley Jr. Lisfrance injury is a very bright red flag……With draft picks 4 & 10, here’s 3 scenarios I can live with: Ikem Ekwonu & Travon Walker, Kayvon Thibodeaux & Tyler Linerbaum, Evan Neal & Chris Olave.