In sports, too many times we see elite athletes who were never able to fulfill their potential because of injuries, drugs and other factors. Chad Pennington was one of my favorite all time Jets who could have been better if not for the injuries he suffered, one on top of another.

He was born in Knoxville Tennessee. His father Elwood, was a physical education teacher and high school football coach. His mother was also a teacher. His first love was basketball but his family and he knew his best chance for a college scholarship was football. Pennington was recruited by only two colleges: Middle Tennessee State University and the University of Tennessee at Chattanooga. But it was after he went to a football training camp at Marshall University that he was offered a scholarship after the head football coach, Jim Donnan liked what he saw in him. Coincidently both of his parents went to Marshall. Pennington was originally a fourth-string true freshman quarterback in 1995 but he moved up the ranks and led Marshall the Division 1-AA title game that year. 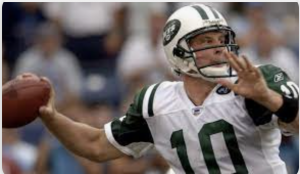 At Marshall, he set school records in multiple categories in addition to finishing fifth in the 1999 Heisman Trophy voting. He finished his career at Marshall with 13,423 yards and 115 TD passes, with former NFL great Randy Moss being at the other end of many of his passes.

He was picked by the Jets in the first round of the 2000 NFL draft as the 18th overall pick being the first quarterback taken. That year the Jets had four first round picks and in addition to Pennington, they picked: Shaun Ellis (12), John Abraham (13), and Anthony Becht (27). They also chose Laveranues Coles (78) in the third round.

In his third year, Jets coach Herm Edwards still wasn't sure what he had in his young QB. He said he wasn't seeing it in practice. But the Jets were 1-4 and struggling with Vinny Testaverde at QB, so he made the change. He went on to lead the team to a 9-7 record and the Jets won the AFC East division championship. In one of the most stunning Jets victories in franchise history, they beat Peyton Manning and the Indianapolis Colts 41-0. In that game Manning was 14-31, 137 yards and 2 interceptions. Pennington was 19-25, 222 yards with 3 touchdown passes. Watching that game, what I remember most was two things: the effectiveness of the Jets running attack with Lamont Jordan and Curtis Martin and the incredible accuracy in which Pennington threw the football. He was so good that his quarterback rating for the game was 142. Just a fabulous performance by the Jets team and their quarterback.

It was the next year in a preseason game against the Giants that the injury bug began to hit. He got hit on his left hand (non-throwing) and a fracture-dislocation forced him to miss the first six games of the 2003 season. The Jets finished only 6-10 that year.

In 2004, after signing a record contract he led the Jets to a 5-0 start. In week 9, he injured his rotator cuff and missed three games. The Jets beat the San Diego Chargers in a first round playoff victory winning in overtime 20-17. Pennington was 23-33, 279 yards and two TD passes. The season then came to a screeching halt in Pittsburgh, as the Steelers beat the Jets 20-17 in overtime in a game Jets fans still have a sour taste about.

In February of 2005, Pennington underwent surgery on his right shoulder. In addition to a large tear in his right rotator cuff, he also had a large bone spur on the same shoulder. In week three of the 2005 season against Jacksonville, he re-injured the same shoulder and needed season ending surgery. As I remember, after these shoulder surgeries his throwing was never the same. In 2006 the Jets finished 10-6 and did make the playoffs losing to the rival Patriots. In that 37-16 playoff loss, he passed for 300 yards and a TD pass. The league voted him as the Comeback Player of the Year returning from his rotator cuff injury leading the Jets to the playoffs.

He continued to play for the Jets though his skills were obviously diminished. Remember that Chad Pennington never had a strong arm to begin with and no one would mistake him for Dan Marino when he threw the ball. His vision and accuracy were his best attributes.

In 2008, the Jets traded for Brett Favre and Pennington was traded to the Miami Dolphins. In Miami, he started all 16 games that year and had a completion percentage of 67.4, with 19 TD passes and only 7 interceptions leading the Dolphins to a 11-5 record winning the AFC East.

For the second time he was again voted the NFL Comeback Player of the Year. Unfortunately more injuries came and he only played in four more games for the Dolphins in his last two seasons.

Chad Pennington announced his retirement from the National Football League on February 9, 2012. He finished his pro football career with 17,823 passing yards, 102 touchdowns and 64 interceptions. He is fourth on the Jets for all-time career passing yards behind Joe Namath, Ken O’Brien and Richard Todd. In Jets’ post season history, he ranks first in completions (107), attempts (178), yards (1,166) and TDs (seven). He helped the Jets reach the postseason in four of his first seven years in the NFL.

He played for the New York Jets at a time when the they were becoming relevant thanks to Bill Parcells. He did a fine job in the three years he coached the team and by drafting Pennington among others.

One can’t help but think what might have been if Chad Pennington was not so injury prone. He had the head of an NFL quarterback and no one worked harder on and off the field. As the only player in NFL history to be voted the Comeback Player of the Year twice, this shows the tenacity and drive Chad Pennington had. He gave Jets fans some great memories and the 41-0 victory over the Colts in that playoff game will always be tattooed in my brain and in those of many Jets fans who had the pleasure of seeing Chad Pennington play quarterback for the New York Jets!

Bill Baird: A Solid Piece of a Great Defense!