The Jets and specifically Joe Douglas are in a prime spot to set this franchise up for years to come.  They have several high draft picks over the next two years and they will probably add more if they trade Sam Darnold or the second overall pick. They are under the cap at around $68 million, so they are also able to be major players in the Free Agent market. It's not unrealistic to think that this roster can be flipped and the Jets could be in... dare I say it.... in the Super Bowl conversation in the near future?  Yes I do dare and yes they could!!

There is only one thing that could de-rail that dream.  And, depending on which utterly ridiculous scenario they went with, could leave them mired in mediocrity for years to come.  They absolutely cannot trade for Deshaun Watson or Russell Wilson.  For the past month I've listened to sports talk shows talking about how the Jets are really the only landing spot that makes sense. Oh, I understand why trading with the Jets makes sense... FOR THE TEXANS! I have yet to hear a realistic explanation of how it works for the Jets.  This is not a knock on Deshaun Watson.  It is common sense.  Then when it finally looked like the Watson news was dying down news broke that Russell Wilson and Pete Carroll were at odds and Wilson might want to be traded.  Sure enough the talk shows were all discussing landing spots and where do you think they thought the best place would be? However, Wilson has a no trade clause in his contract and he gave Seattle a list of the teams he would be willing to be traded to and, fortunately, the Jets are not on that list.

Here are just two of the proposed trades from two respected NFL commentators, Peter King, well known NFL insider journalist, and Mike Tannenbaum, former Jets GM, now ESPN guest contributor.  King proposed the Jets give up two first rounders, the second pick this year and the higher of next year’s two number ones, this year’s second rounder (#34), and a second round pick in 2023.  Plus, the Jets send them Sam Darnold and Quinnen Williams.  But wait, there's more!  The Texans are cap strapped so they could ask the Jets to take on the $10.5 million guaranteed contract for Whitney Mercilus!  To be fair, King does say Joe Douglas would probably pass on trading for him knowing how many holes the Jets have to fill.  Then there's Tannenbaum.  He's on the record saying if he were still GM of the Jets (we should all thank our lucky stars he's not), he would part with four first round picks and Quinnen Williams.

The other scenarios I heard were much the same.  So let's look at this logically.  The Jets need a defensive back or two, another defensive lineman or edge rusher, an offensive lineman, really probably two, and maybe a running back, wide receiver or tight end.  Are they willing to trade all our top draft capital and our best young defensive lineman for one quarterback? What are they going to surround him with?  The Texans weren't very good last year and Watson got sacked 49 times.  The Jets line was worse.  There goes one third of the cap space to sign free agents. There goes all the high draft picks that should have filled holes with guys who could have stepped right in as starters.  Could they still possibly start right out of the gate, sure, but Joe better hit on a lot of his picks.  He doesn't have much room for error.  Same with free agents.

The biggest decision Joe Douglas is going to make this year will be if he's going to splurge on the shiny new sports car or buy the sensible four door sedan that will last him for the next fifteen years.

Ray Clifford, a lifelong fan wrote this article. Ray appears on the Jets Rewind Podcast and has been a Jets fan his entire life.  The Podcast can be heard at: 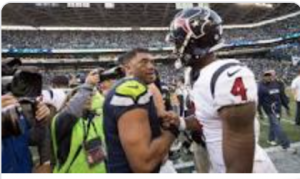